The Thunder finally found the right mix of offense and defense last night, sending the Spurs to their first defeat of the post-season. This new drama sets us up for what could be the most competitive game of the playoffs so far, as the Thunder will try to even the series. They're not out of the woods yet.

I think the entire OKC fanbase was set to throw Kendrick Perkins out in the dumpster, but Scott Brooks stayed with him. As a result, he got a monster defensive game out of Perk, who had success against Tim Duncan, Manu Ginobili, and Tony Parker.

Can one game truly reverse a series? While the Spurs are still in the driver's seat, there is no question that one team finally believing that it can win while the other team realizing that it can lose can change things drastically.

The Night the Thunder Evolved | ESPN

Arnovitz is producing some amazing deadline reporting stuff during these playoffs. In this post he breaks down a number of OKC defensive plays that enabled the Thunder to put the Spurs on their heels.

Lowe's analysis is always great, but this post is exceptional in how he shows what the Thunder are doing defensively. Essentially, they are taking a number of calculated risks in order to allow their superior athleticism to attack the Spurs offense. They are banking that they can get a steal, deflection, or force a quick shot before the Spurs can find the soft spot in their defense.

Dwyer points out that OKC took some tremendous risks in the way they established their defense in Game 3, and it may not work again going forward.

Thunder Beat Spurs At Their Own Game | CBS Sports

Doyel affirms my prediction that the Thunder way to wins is not by their 'big three' scoring at an incredible rate; it has to be a different method. Also, Doyel points out that it seemed like OKC was the patient team while the Spurs were the ball hogs. I think though that it has more to do with the players' ability to understand where their options lie. If a point guard doesn't see any passing lanes, he has to shoot. That's not ball hogging, that's good defense.

Harden Growing Into His Game | ESPN

This is an excellent profile on James Harden, who continues to show an ever-maturing game. After a terrible Game 1, Harden has come back with two impressive performances.

"Once you get confidence in this league, your game can go up leaps and bounds, and that's what happened to James...He's getting more opportunities to control the ball, be more of a scorer for us this year. He's excelled, man." - Kevin durant on Harden

Li'l Wayne, NBA fan if not a bit of a bandwagon jumper, tried to come to OKC for Game 3. He was politely rebuffed of the typical celebrity perks.

After the jump - we know that Gregg Popovich will respond with the appropriate adjustments, but even so, this is a pretty great facepalm that Pop pulls off.

The part where he basically lies down on his assistant's lap is a nice touch. 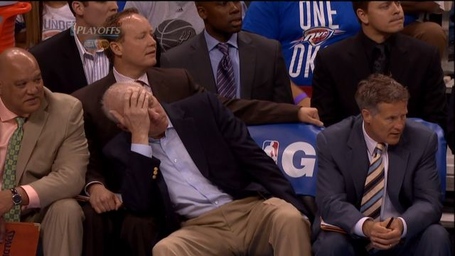