Sebastian Pruiti offered one more post on the Thunder vs. Mavericks series, taking a closer look at how OKC was able to maximize the effectiveness of James Harden against the Mavs' big men.

The whole post offers some great analysis on how OKC figured out how to crack the Dallas D. Since the Mavs were on full-lockdown mode against Kevin Durant and Russell Westbrook, it exposed Dallas' weakest link (and not coincidentally the missing cog from last year's championship run) - their interior defense.

What I want to focus on however is the smallest of plays...not even a play, really. It is a moment, a fraction of an overall play. Despite its superficial triviality however, I think the magnitude of its greater meaning is significant.

The moment involves Westbrook and occurs in the first half of this clip - do you see it?

The Mavs are in a zone, trying to protect their soft interior while baiting the Thunder into taking a quick perimeter shot. Harden rotates the ball to Westbrook, and for some reason, the Mavs up-man Shawn Marion does not close on him, but drifts to the corner to guard Derek Fisher. Westbrook is suddenly looking at a pathway into the lane and he attacks.

No. Actually, he doesn't.

We have watched Westbrook play and mature over these past 24 months, and it is reasonable to say that if it were a year ago, Westbrook's drive would have ended up either 1) forcing a jumper out of one of Westbrook's 'danger zones;' or 2) in Ian Mahinmi's chest for an offensive foul.

Take a look at this still-frame: 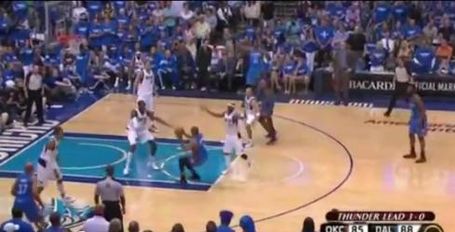 If the year is 2011, is there any question as to whether that shot is going up 10 times out of 10? The Thunder offense is closing in on the comeback, Westbrook has gotten into the lane, and there are no easy visible passing angles available. Marion has Derek Fisher sealed off, Dirk Nowitzki will intercept any pass thrown toward Kevin Durant, and Jason Terry is blocking out James Harden. It HAS to be a shot, right?

There are a number of ways to bust a zone defense, but one of the easiest is that you make it shift from left to right so that it creates pockets. Westbrook has found a pocket for the briefest of moments but it is about to close, as Mahinmi and Terry surround him. When one pocket closes, however, another one opens.

At this moment the old Westbrook gives way to the new Westbrook. He knows that if Dallas closes on him, a better shot is going to open up somewhere else. He pump-fakes Terry out of his sneakers, which does not have the effect of creating a shooting lane, but a passing lane back to Harden. Westbrook has shifted the zone, and now a new pocket is going to emerge. Jason Kidd closes on Harden, so Harden swings the ball to a wide-open Durant, who buries the 3-pointer to tie the game at 88.

Westbrook's moment is subtle, but it speaks volumes at his incremental growth as a basketball player. A season ago not only does he probably not make this play, but he probably doesn't even think about making this play because he doesn't understand how to make a zone defense shift quite well enough.

Westbrook finished the game with only 12 points on 3-12 shooting. Yet, because of small plays like this one, I considered his Game 4 performance every bit as successful as his previous three because Westbrook understood what was required of him in the moment. He along with his teammates recognized that they had a player mismatch in Harden and they had to go to that option as long as it worked. Westbrook scored 12 points, but only took 12 shots (only 1 shot attempt in the 4th) so he never attempted to gun his team back in (or more likely, out) of the game. He also had six assists (including the one to Serge Ibaka that gave OKC their first lead of the 2nd half), had three critical steals, five rebounds (2 offensive) and zero turnovers.

The final quarter belonged to James Harden, but it is encouraging to recognize how Westbrook's growth helped bring the winning moments to reality.