Share All sharing options for: Thunder vs Mavericks 2012: Two Lingering Thoughts From Game 2

The Thunder are up 2-0 on the Mavericks in the opening round of the playoffs. Tonight's Game 3 is critical; Dallas knows that they cannot go down 3-0 against the Thunder, while OKC must know that Dallas is going to come out as a desperate team. Here are two musings I have been pondering heading into tonight's game.

There has been some hand-wringing in the past few days even as the Thunder have won the first two games of the series.

We don't live in a vacuum, and we know full well that the #1 seed in the West, the Spurs, have been making mince meat of the Utah Jazz. We look to the East and consider the Miami Heat, and they're dominating the New York Knicks to such a degree that Amare Stoudemire is going mental on fire extinguishers. We look at this and we think back to the hype and expectations we have come to live with while thinking about the Thunder. We remember how they for brief stints had the best record in the NBA, how they held the #1 seed for almost the entire season, how they have two All-Stars, an MVP candidate, and one of the best defensive players in the league, and yet...and yet...four point combined win totals.

We've been living on a hidden assumption, and that assumption is this: "If the Thunder cannot dominate a #7 seed, then they have no hope at all of winning the Championship."

If we are discussing the series without context, I would be concerned as well. However we do have some, so here is a half full glass of context for you.

Here is a little chart I've put together that tracks the NBA's past champions and the runners-up going back to 1990. The teams represented in each line are the PREVIOUS year's Finals participants and next to each team is THIS season's seed. In other words, in line 1 we have the Mavs and Heat, LAST season's Finals representatives, and next to them is THIS year's seeding, so in the current year the Mavs are seeded #7 and the Heat are #2. The purpose of the chart is to see how each year's finalists did in the season after they played in the Finals. 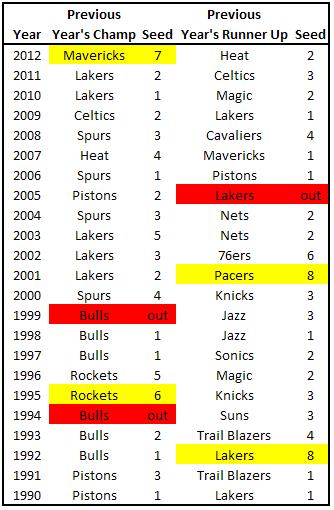 A few things jump out:

Kevin Durant has struggled on the offensive end of the court through two games, and is a testament to him that he is still fully engaged in the offensive process of producing points. Despite his shooting struggles, Durant has continued to work his way to the free throw line time and time again (14-16 in Game 2 alone) to produce the points his team needs. On the road, OKC is going to need those points even more.

What exactly is Dallas doing well or differently from most other teams that Durant has faced? I re-watched every Durant possession that resulted in either a shot or a turnover and it was quite the eye-opener that says a great deal about the Mavericks organization.

Shawn Marion deserves all the credit in the world in staying in front of Durant and contesting everything, but to say that Marion is the reason why Durant has struggled is a disservice to the Mavericks team overall. Mavs coach Rick Carlisle commented in last year's playoffs that Durant's missed shots weren't just happening by accident; they were game-planning the heck out of him and were always fully aware of where Durant was at all times.

In re-watching his possessions, I have to confirm that yes, Dallas has continued to game-plan the heck out of Durant and always knows where Durant is.

Marion's greatest strength in guarding Durant is that he knows how to stay in front of him after Durant receives the ball. He doesn't fall for jab steps, shoulder fakes, or the like, because Marion knows that he can rise up and contest the shot as quickly as Durant can.

However, Marion is greatly aided by the fact that the team overall never lets Durant roam free. In the first two games, every shot inside the 3-point arc was getting contested by somebody. Even the shots Durant made were being challenged so that he did not simply have a clean catch and shoot. He has very little space in which to work, and the crowding out by the entire Dallas defense is effecting Durant's shooting effectiveness.

Lack of space is the problem, so the creation of more space should be the solution. The two things that we have not seen Durant do much so far are:

a) Pump fakes. It is funny to think it, but the pump fake with the ball is a tool that Durant seldom uses. As opposed to his Dallas counterpart Dirk Nowitzki, who has every subtle head and ball fake in the book, Durant rarely fakes what he is doing with the ball. While he might employ a cross-over or a jab-step, once the ball is up over his shoulders, it is either being aimed at the rim or at a teammate. The result is that he is allowing Dallas defenders to close out on him a little too easily from all angles. Some simple pump fakes would give Durant a few more opportunities to receive the ball and not feel rushed as he sets up for his shot.

b) Use screens while with the ball. Durant loves to use various types of screens to spring himself open for shot attempts and drives, but he has not yet utilized many screens while holding the ball. With Marion latching onto him, Durant needs to find a way to create some separation with the ball in his hands.

OKC heads into a hostile environment to deal with a situation they have literally never faced before - up 2-0 against the defending champs looking to make the knock-out blow. The Mavericks, well, they actually know what that feels like. They did it to the Lakers last season in a 4-0 sweep of the defending champs. We're about to find out if the Thunder are ready to learn that lesson as well.

"We're not good enough to relax or take the pedal off the metal...You don't want to ever give a champion life." - Dirk Nowitzki on the Lakers, 5/6/11