Share All sharing options for: James Harden's Struggles vs Spurs in WCF Game 1

James Harden struggled mightily in WCF Game 1, and his struggles contributed greatly to the Thunder's deconstruction in the 4th quarter. When it comes to Harden, the Thunder offense is predicated on two elements - that he run the 2nd unit during the 2nd quarter, and that he become a primary distributor during the 4th. He has been given immense leeway and responsibility by Scott Brooks, and for the most part has fulfilled his obligation with flair. However, in Game 1 Harden looked off-balance, as if he did not seem to truly understand how to find the soft spots of the Spurs' defense. Ethan Strauss does a great job addressing Harden's inability to get to the free throw line here:

Strauss examined how Harden was not getting a lot of the foul calls he usually receives, and his failure to do so put a major damper on his offensive efficiency. Harden lives at the line and it makes him one of the most efficient scorers in the game. By not getting calls however, Harden looked like he was standing on a chair and one of the chair legs was removed. Here is Strauss' video analysis:

I want to play off this analysis and examine something else as well. Harden too knows the kinds of shots he can make, but the Spurs have effectively game-planned to take those shots away. In particular, Harden wants to either get to the rim or shoot the 3-pointer. As you can see in the clip above, he failed numerous times to get to the rim. Two offensive charges in the 4th in particular helped seal the Thunder's fate. In the past, we've noted that Russell Westbrook can be a great scorer when he looks for the kinds of shots he knows he can make. Going forward, Harden must now recognize the same soft spots and attack accordingly.

In reviewing Harden's play, it looks like the Spurs are treating Harden in a similar way that they treat Westbrook - they are allowing him to get past the first line of defense and are ceding the 15 footer, but absolutely will not yield the shot at the rim. Both men have to recognize what the Spurs are giving up, because both can feast on these shots if they know where they're coming from: 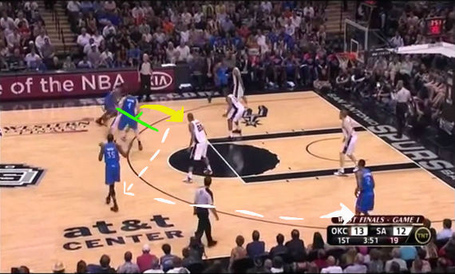 Harden has developed great chemistry with his screener Nick Collison, and Harden correctly reads the screen here. He goes hard to his left away from the screen, which puts him in a sweet spot to break down the Spurs defense. His lane quickly closes up however, and the correct play is to kick it out to Kevin Durant, who should then be able to swing it to Thabo Sefolosha in the right corner. Unfortunately Harden continues to the rim and gets swallowed up. 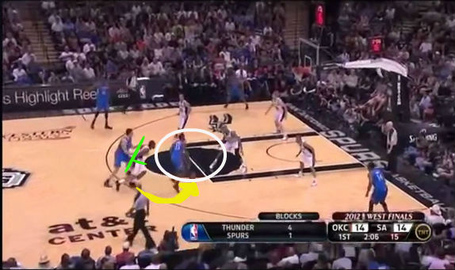 Harden again reads Collison's screen correctly and drives into the lane. Tim Duncan does not come out to meet Harden, but actually backpedals and allows Harden to continue to attack to his stronger left hand side. Duncan is more than happy to do that because he knows Harden isn't going to pull up; he's heading straight to the rim. At this point Duncan probably could have handled Harden by himself, but if he couldn't he has Manu Ginobili and Tony Parker collapsing on Harden as well. There is no way Harden can get a clean look at the rim against this defensive set. Instead, once Harden clears the pick he has to be looking for that free throw line jumper. 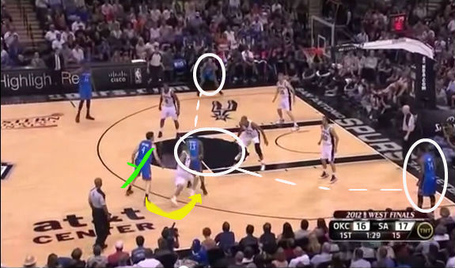 This play is almost identical to the one before it, except Harden uses the screen and gets his man Tony Parker on his back hip. With a Spur completely eliminated from the play, Harden has to make the right decision once he gets into the circled area. Duncan is not going to jump out, so Harden has some space to shoot. And yet Harden hesitates and starts to circle back out, which allows Parker to recover. Even then, Harden is looking at a wide open Derek Fisher right in front of him. For some reason Harden misses the pass, pivots back into Duncan, and throws up a shot that has no chance. 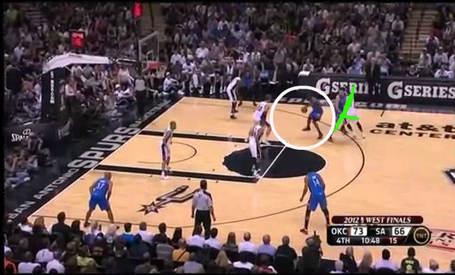 In this last play, Harden once again correctly uses Collison's screen and has the bigger and slower Tiago Splitter 1-on-1. Splitter immediately retreats his position, just like Duncan did. Harden passes up what would have been an easy 15 foot jump shot, and instead takes the ball straight into the body of Splitter and picks up the charge. Harden fails to take an angle on this attack, which allows Splitter to hold his ground. In the past, Harden might have taken a better angle and drawn the foul, which would have helped the Thunder put points on the board when their offense struggled. Not this time, however.

It is often said that the Spurs are a smart enough team to know exactly what the opposition wants to do the most and then prevent them from doing it. Their defense against Harden and Westbrook in particular is especially devious, because they are showing a seam in the defense where a ball handler could potentially drive, but then they seal it up once the OKC player commits. It is the exact same thing we saw Dallas do to Westbrook last season, and the Spurs used it well Sunday night.

The corrective action is that the Thunder duo have to recognize the situation once they get past the first line of defense and then look for those open 15 footers. Westbrook in particular learned from last year's experience, and his mid-range jumper was a big reason why he was able to run wild against Dallas in these playoffs. Both men can make that shot, but they each have to be ready for the shots to open up and then shoot with confidence. OKC has to force Duncan to move forward, rather than backward. He and Splitter are disciplined enough that they are not going to yield the front of the rim voluntarily; OKC has to make them do it by getting to these spots and making the Spurs pay for their defensive strategy.