Russell Westbrook has been the offensive catalyst for the Thunder during OKC's first two wins against the Mavericks. As opposed to last season's playoffs, Westbrook has proven to be much better equipped and knowledgeable in how he has approached dealing with the Dallas defense. We saw last season (see point #2) that Westbrook struggled mightily in what the Mavs defense was trying to do with him. As a result, Westbrook missed an inordinate number of shots that should be quite makable simply because he wasn't quite ready to shoot.

In these playoffs however, Westbrook is doing a much better job at discerning where his shots can come from and is being more careful about staying out of those 'problem' zones. As Zach Lowe wrote yesterday, the book on Westbrook is changing, and to the surprise of many, it seems to have caught the Mavericks off-guard.

Last season, the biggest problem zone was right in front of the rim from about 8-10 feet out. Time and time again the Dallas defense would practically usher Westbrook into those shooting zones and give him an open look, and time and time again Westbrook missed. Westbrook is nothing if not a tireless worker, and he spent a great deal of time in the off-season ironing out some of those shooting issues. The end result is that this season Westbrook has taken a very Steve Nash-like approach to his shot attempts. While he is still a long ways away from one of the purest mid-range shooters in the game, what he did learn was where his personal sweet spots are and how to get to those spots. We noted a few months ago how, when Westbrook has efficient shooting nights, his shots are clustered around two main areas - at the rim, and in the extended lane. He has become so good in those shooting zones that even the best defenses have had trouble stopping him.

Last season (and even earlier this season) the Mavericks did a good job steering Westbrook out of his preferred zones. In the first two games of this playoff series however, Westbrook has done a much better job at sticking to his preferred spots and exercising sound judgment for his own offense: 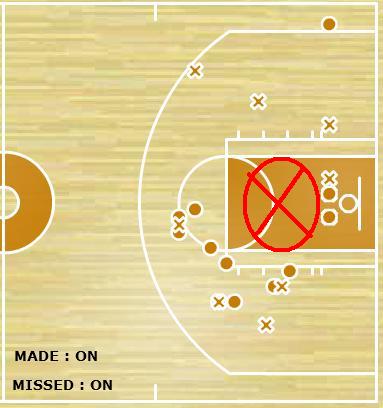 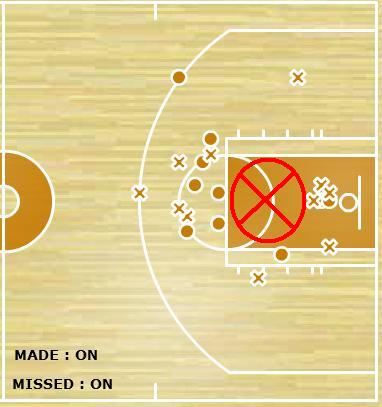 You can see that for the most part, Westbrook is getting the exact type of shots he is best at - straight on and right around the free throw line. It is a good thing too, since Shawn Marion has kept Kevin Durant bottled up offensively so far.

Furthermore, Westbrook has completely avoided that area in the lane where I've X'd out. That's the spot where he kept missing shots a season ago. Even though it seems like it should be a very makable shot for a player like Westbrook, he has struggled with it and it is not a reliable part of his game yet. So instead of continuously over-penetrating into the lane and taking a shot with which he is not comfortable, Westbrook has continued to look for his free throw jumper and has earned positive results.

Mavericks coach Rick Carlisle is no dummy, so undoubtedly he understands Westbrook's shooting tendencies and will try to fix his defense so that Westbrook does not get so many clean looks straight on. However, this is easier said than done, because Westbrook has been utilizing the high screen and roll exceptionally well. If the Mavericks go over the screens, Westbrook rockets to the rim. If they switch and get a big man like Ian Mahinmi on Westbrook, Westbrook just bides his time, gets the big man to back up, and then buries the jumper. If the Dallas big man tries to press, Westbrook will bolt right past him to the rim.

What has helped make Westbrook's jumper so deadly is a combination of improving mechanics and the continued use of uber-athleticism. Here is what super defender Marion had to say after Westbrook burned Dallas for 57 points off of 23-44 shooting:

"When he sees certain guys in front of him he's taking the challenge of trying to just line them up and go directly at people's heads and he's knocking down that 15-, 16-footer consistently...It's hard to stop because he's so athletic and his second boost is hard to guard...I feel like I can use my lift a little bit when he's shooting it, I can get in the way of his shot. Everybody else, he's jumping so high on his shot it's like he's by himself up there."

Such words from Marion are the rare exception because he is a prideful defender, and it is not the first time Marion has vouched for his young opponent. If I had to speculate, I wonder if it is because Marion too has had an unorthodox career where everyone has questioned what he cannot do while ignoring what he can do.

When Game 3 finally arrives, we will watch closely to see how Dallas tries to counter Westbrook's offense. If the Mavs opt to switch Marion on Westbrook, we will know that it is the boldest tip of the cap to Westbrook that the Mavs can make.