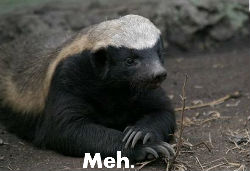 Darnell Mayberry: What about a nickname? It's sort of strange that you don't have a nickname. Have you ever had one?

Russell Westbrook: No. I never had one. There's never really been one. I just kind of play.

Westbrook : I haven't really heard nothing to tell you the truth.

Mayberry : Some people like ‘Honey Badger.' Have you heard that?

Westbrook : Yeah. I've heard that before. But that's the football dude's. The dude that plays for LSU (cornerback Tyrann Mathieu). So that name is kind of out of the picture. That's the only one I've really heard of before.

Mayberry : You don't have any others that you like or think fit?