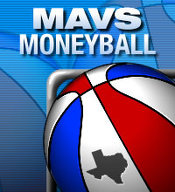 The Thunder host Game 1 of the opening round of the playoffs tomorrow night against the Dallas Mavericks. As is our custom here, we want to get first person accounts for what we should be in for in this compelling opening round. Once again we turn to Lisa Rotter, the GM of the great Mavericks site Mavs Moneyball. She is about to learn that there is nothing so compelling as watching your team, the defending champs, go to work in defending their crown.

To read my answers to her great questions, GO HERE.

To see previous Q&A's we've done with Mavs fans, you can find those here:

Dallas Mavericks Q&A: Checking in With the Dallas Newsdesk

Dallas Mavericks Q&A: Back With Our I-35 Friends

How do you think the Mavericks' regular season went in their preparation to defend their title? Were you surprised at their periodic struggles during the season? How did they weather the loss of Tyson Chandler and J.J. Barea?

Mavs Moneyball: I have said and will continue to say that this season will need a giant asterisk next to it when all is said and done. From the absurd lockout circus to letting a handful of the championship team walk to acquiring cheap players with ridiculous potential to the Lamar Odom Experiment, this has been more of a reality TV episode than anything else. I think we all knew the shortened season would be rough on tired, old legs. I don't know that anyone thought this was going to be a pretty season in any regard, but if you had told me our defense would be fine but our offense would suffer with the loss of Chandler and Barea, I would have called you slow. Our acquisition of Delonte West stemmed the bleeding on the defensive end, and Vince Carter was a very positive addition to the offense. But I still think losing those other two stymied our ability to penetrate to the basket somewhat, leaving our rebounding and second-chance stats to suffer.

Finish the sentence: "The Mavericks will pull off the upset and win this series if..."

MMB: The Mavericks will pull off the upset and win this series if everyone predicts them to lose. Which apparently they have already, so there you go. No but really, in the past Dallas has had the mental advantage over OKC. This season proved that young legs and freakish athleticism can get you by when you have back to back to back to backs. And the Thunder owned the series this year, so the mental advantage may have flown the coop. Unless... unless the Mavericks just needed a few days rest and a good matchup that they know they can handle. Confidence is everything in this league.

Finish the sentence: "The Mavericks will fail to defend their title and lose this series if..."

MMB: The Mavericks will fail to defend their title and lose this series if they're just too damn old and tired. Which they very well might be.

Many thanks to Ms. Rotter for her time, and be sure to check out Mavs Moneyball to get prepped for Game 1.