At this point, the #2 seed is a foregone conclusion. The Thunder can only catch the Spurs if they win out and San Antonio decides to throw away their remaining three games (and even then they'd probably still go 2 out of 3). Even so, I feel like #2 spot is where the Thunder belong. OKC is quite good, but not quite as good as the Spurs this season. Regardless of whether the Thunder were #1 or #2, to get to the Finals they will likely have to go through San Antonio anyway.

Mayberry writes that this was a bad loss, but I disagree. I contend that it was another loss that revealed bad tendencies, just as most losses have been this season. Think for a moment - how many times this season have we uttered the words, 'that was the worst loss of the season?' Probably after 2/3 of them.

Would you give the Defensive Player of the Year award to Serge Ibaka?

Thank goodness for us all that Chris Paul is playing for a contender. LeBron James will win the MVP, but given the choice between he and CP3, it's at least a debate, right?

All that said about CP3, he ought to talk to his teammate Reggie Evans about this. Yikes.

Rudy Gay With the Shutdown Line of the Year | SB Nation

(Apropos of nothing, this is one of my personal favorite pieces by Ralph Wiley on 'shut-down' lines.)

The Dark Half | Hardwood Paroxysm

I personally have to put aside the idea that Metta World Peace's elbow was intentional/accidental. I think that's the wrong concept. The better concept is that he's got a ton of baggage in his life and he never knows when it is going to come out. In other words, he's a potentially hazardous individual in a similar vein to Mike Tyson.

Mavericks owner Mark Cuban has never been equivocal about his stance on the Olympics, and he applauds Dwyane Wade for taking the 'amateur' spectacle head-on.

Kevin Love first shaved off his beard, and then his mustache. He then transformed from Guy on a Buffalo into a former member of the Backstreet Boys. 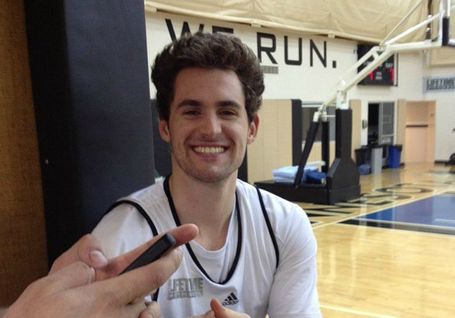