Share All sharing options for: Russell Westbrook Finds His Spots Against Bulls

Russell Westbrook played another superb game Sunday afternoon against the Bulls, scoring 27 points on 10-18 shooting. Last week we took a look at Westbrook's shooting tendencies and noted two general things. The first is that Westbrook is most comfortable looking for and taking jump shots that are in the extended lane area from about 12-18 feet out. He has come to make those shots with remarkable accuracy. The second is that whenever he ventures too far away from this area, his shooting drops pretty drastically. As a result, we asked the question - how would the Bulls deal with Westbrook's shooting particulars?

As it turned out, not very well. Here is Westbrook's shot breakdown: 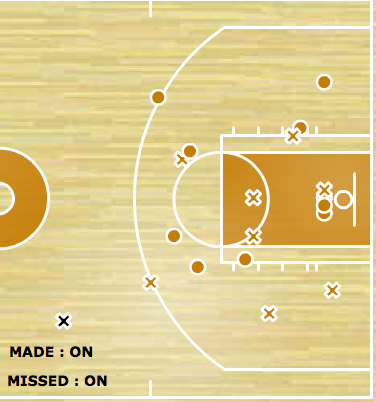 You can see from the shot placement that Westbrook got right into his jump-shooting sweet spot seven times during the game and made the jumper four of those times. Furthermore, he also got to the front of the rim an additional two times (the 3rd was a breakaway slam). As long as Westbrook stayed within that sweet spot, he shot an exceptional 7-11 from the floor.

Westbrook's continued shooting excellence is putting opposing defenses at a strategic advantage. Every time Westbrook gets another one of these 12-15 foot jumpers with plenty of space around him, he forces the defense to make a decision. 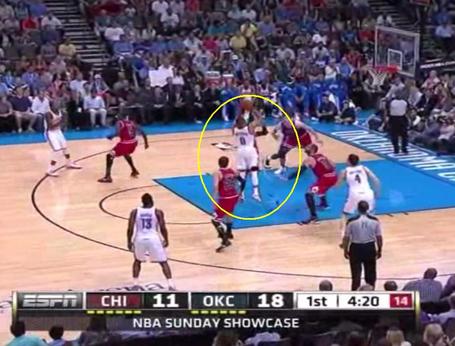 Teams are going to have to decide if they want Westbrook to take those shots. Thus far, the Lakers, Trail Blazers, and Timberwolves all decided to give it to him, and he made them all pay. In the future, are teams going to close out on him harder? Are they going to trap him? Or will they force him wide, like in this shot attempt? 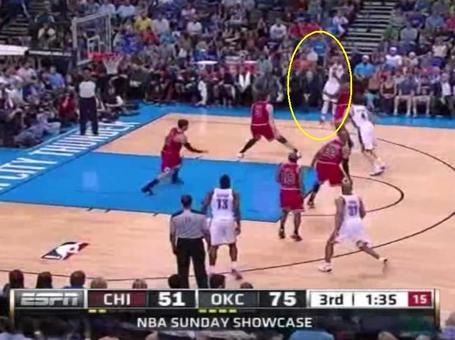 That's the place where teams should want Westbrook to go, out in the wing with no offensive support, but it is easier said than done. Westbrook got to his spots against the best defense in the league with little trouble. Even better, this jump shot is only the first chess piece move in the game. When we get to the playoffs, teams cannot simply allow Westbrook to shoot this jumper over and over again. They will have to make a decision, and those teams' responses will pave the way for the next step in Westbrook's basketball education.

Westbrook will need to be ready to throw the counterpunch.

And here is his Tom O'Leary: