Sonicsgate to Appear on CNBC Friday, April 27th at 7PM PDT With New Footage and Graphics

Share All sharing options for: Sonicsgate to Appear on CNBC Friday, April 27th at 7PM PDT With New Footage and Graphics 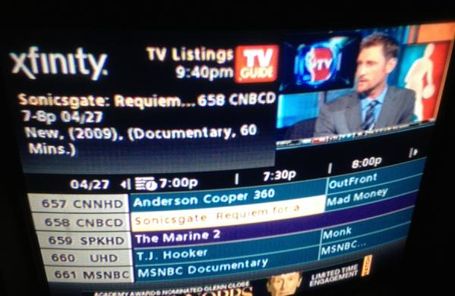 The talk of the NBA returning to Seattle isn't showing any signs of subsiding, and neither is the talk of how Oklahoma City stole Seattle's beloved team. It looks like the documentary showcasing the team's move will get national airtime on CNBC, giving it a much wider exposure than it's previous internet-only premiere. It's on a Friday night, but hey, TV time is TV time. According to the Sonicsgate guys, the film will have all new graphics and footage.

I'm eager to see the results of this level of publicity. As with most level-headed Thunder fans, I'm eager to see a team return to Seattle. And there have been talks of financing something to replace Key Arena. But Stern has said in the past that he's against returning to the city, and it's hard to see the NBA expanding when it's currently set at 30 teams. Could this set the stage for the purchase of a struggling team? The Kings? The Grizzlies? The Bucks? Only time will tell.