Kirk Goldsberry is a smart man who likes making pictures. More specifically, he is a professor specializing in spatial reasoning, visual communication, and geographic representation and currently is a visiting scholar at the Harvard Center for Geographic Analysis.

In his spare time, Kirk likes to make pictures about the NBA. Today he posts a great piece on Kevin Durant and KD's favorite shooting zones. I highly suggest you check it all out, because I'm only going to steal one of his images.

Does it seem like Durant is most deadly when he's stepping into a dead-on three point shot? Are there times when his mid-range game seems unstoppable? Goldsberry uncovers Durant's sweetest hot spots on the court. 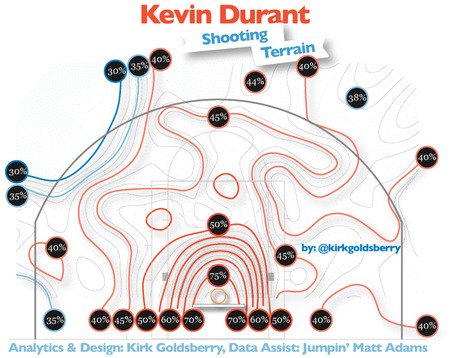