Kevin Durant and the Anatomy of Two Final Plays

Share All sharing options for: Kevin Durant and the Anatomy of Two Final Plays

The Thunder, facing a two point deficit, had the ball on the sideline. Their most adept player, James Harden, was in-bounding the ball. One of the game's best closers (Kevin Durant) hung in the wing waiting to break, while his almost equally unguardable brother-at-arms stood on the opposite wing ready to jump into action. There is almost nine seconds remaining, plenty of time to run through a complete offensive set.

We know how the shot ended and we know how distraught the team was after the fact. We have also been here before.

Kevin Durant admitted he didn't take the shot he wanted: "No, he was playing off me a little bit and it got clogged up. I didn’t want to risk a turnover so I shot it."

Coach Scott Brooks sounded disappointed but reflective: "Kevin thought he had a chance to make that shot. We were down two. It was an opportunity for us to drive and to get it to the paint. But you live with it. It’s one of the things you do. Kevin makes shots, makes plays for us. It didn’t go this time, but it’s one of those things...The last shot, I thought we could’ve got a better shot than that, but that’s part of learning and part of understanding what we need."

In re-watching this final play about 30 times and trying to figure out what exactly the Thunder were working to create, my assessment is...actually, the Thunder did a pretty decent job of running the play. I think that is why Brooks was so bothered by it - he set it up, his guys ran it properly, and when it came time for the moment of truth, Durant cut it short and forced a bad shot.

Harden is in-bounding the ball, Kevin Durant is on the left block and Russell Westbrook is on the right. Serge Ibaka is set at the top of the key on the left, and Kendrick Perkins is on the right. The first action is to get the ball in-bounds to Westbrook in a standard pin down screen. When a team is going to employ numerous screens to get off a shot, I am reminded of a famous John Wooden quote - "Be quick, but don't hurry." In other words, a player should use his athletic ability to its fullest but must be careful not to rush the play. Even though this initial screen is a bit of a throw-away because this isn't where the shot is coming from, we can still see opportunities missed: 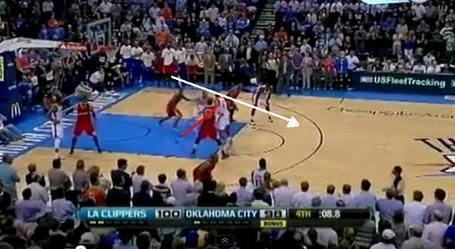 Westbrook starts his break before Harden has even touched the ball. When Ibaka slides down to screen Westbrook's man (Chris Paul) there is little that Ibaka can do except slow Paul down. It is too late to try to set a real screen because if Ibaka tried, he might get called for a moving screen foul. Westbrook needed to stay on the baseline until Ibaka came to him, which would have allowed a clean release to the top of the key. If CP3 were then stuck under the basket, Westbrook would have had all kinds of space to really attack.

However, that wasn't the called play, so opportunity was unfortunately neither sought nor wasted.

This is the key screening sequence, which the Thunder executes well: 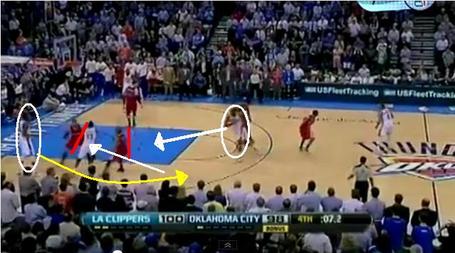 Harden goes from the sideline down to set the first pick on Durant's man, Kenyon Martin. He sets a good screen on Martin and this screen gives Durant a clean release. Next, Perkins comes around and gives Durant a second screen on Martin, and Durant has plenty of room to receive the pass in space at the 3-point line. The entire in-bounds sequence has taken only four seconds and Durant has about five seconds to make a move. What is the move? What is the play designed to do? 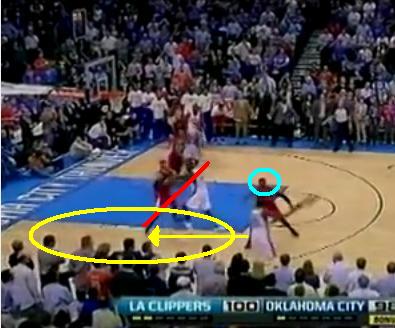 Clippers big man DeAndre Jordan has done a great job trailing the play and recovering to seal off the lane from Durant. However, I don't think that is the painted area Brooks is talking about above. Instead, the play is designed for Durant to drive hard to the baseline. Consider what would have happened if Durant had done this:

It was a frustrating ending, to be sure. However, by rewatching the play numerous times, we can see that Durant's opportunity to make the decision was extremely small, perhaps less than second. Had he waited any longer, Martin would have recovered and Jordan would be tight on Durant out past the 3-point line. The worst criticism that I can hang on Durant for this play is that he does not yet have Chris Paul's internal clock; Durant has not yet learned that five seconds is...five seconds. I take away this as a positive thing, because the next time Durant finds himself in this type of situation, he will remember that he has more time to work and will trust the play as it is set up.
***
As a bit of contrast, let's take a quick look at an earlier play this season where the situation was almost identical. The contest was the wonderfully played overtime game against the Nuggets, where we saw Durant score a career-high 51 points.
In this game, once again the Thunder were down by two points, with the ball, with seven seconds remaining.

The situation was similar but the Thunder ran a slightly different in-bound set in this play. Harden is still in-bounding the ball, but Durant and Westbrook are starting at the top of the key together. Durant actually starts the play by setting a screen for Westbrook, and I happen to love this type of play because it forces the defense to consider Westbrook as a scoring option. 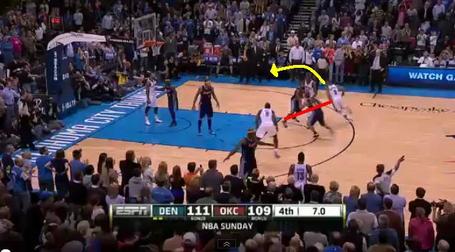 If the final sequence is a catch-and-shoot, everybody knows that the ball is going to Durant (our own Rickpidero says we should simply just call this "The Play" from now on). However, with seven seconds there is plenty of time to create an entire offensive sequence, and this Durant screen forces the defense to re-consider what is going on.

Ibaka follows up with a great screen on Durant's man, and now Durant has the ball and forward momentum to attack the defense. 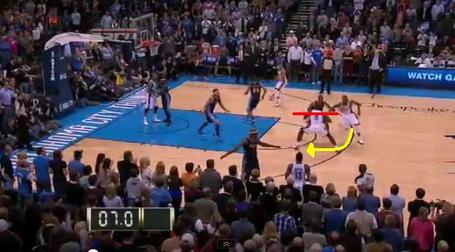 These next two elements are subtle, but they make a huge difference in what Durant sees: 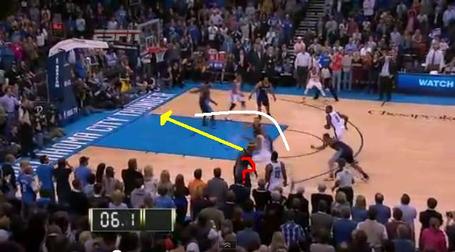