The Thunder are back in action tonight against the Clippers. There are a few truly meaningful games left to be played this season, and tonight is one of them. The Thunder cling to the narrowest of leads for the #1 seed, while the Clippers are trying to jockey for better playoff seeding by jumping the Lakers.

What would have happened if Russell Westbrook had been drafted a year before Kevin Durant?

We sometimes forget that Kevin Durant is 6'10" when he pulls off moves like this. He still needs to be careful when he tries to drive the ball into traffic, but one-on-one, he's getting the mechanics down quite nicely.

My home garage is basically the same, except I have more rims set up.

The Value of Clutch | Hickory High

In which the intelligent Mr. Levy shows us that Pythagoras was a actually a fan of late game ISO plays.

Mark Cuban and Mikhail Prokhorov get ready to nuckle up over Deron Williams.

We mentioned yesterday that Skip Bayless got caught with his pants down when he went after Russell Westbrook again. Jalen Rose did the calling out, but it was these guys at The Lost Ogle that initiated the research. Well done.

If I were a clever and savvy social media analyst, I might compare Skip's tweeting dickishness with someone like Anthony Weiner's literal similarity and keep the ball rolling. But I'm not, so now I just kind of want Skip to stop talking for a while.

Big props to Beckley Mason for a Muppets Show reference here. The Spurs offense is so efficient this season because they know exactly what they want to do in the half-court set.

For the Weekly McGee, we actually have a very good profile of the young wunderkind. I think this profile is one of the reasons why we're cautious about being too hard on McGee. You can see that there is something there that is worth cultivating, even if he's many degrees removed from joining his physical skills to his basketball IQ.

I'm sure there is a subliminal message in here somewhere. The pic is after the jump. 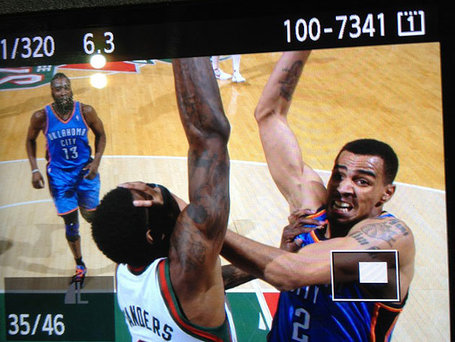 The Sefoloshas of the world rejoice at that one.