James Harden Shaved Off His Beard!

Share All sharing options for: James Harden Shaved Off His Beard!

Sometimes, recognizing the third or fourth man on a good team is difficult for the casual fan. Once you get past the Kevin Durants and Russell Westbrooks, some players start to blend in people's minds. But almost anyone who's seen a Thunder game will immediately recognize James Harden.

Why? It's the beard. What started as closely trimmed had evolved into a scraggly mess, one that rivals the beard of Baron Davis. In fact, Harden has declared himself as "taking over the throne" from Baron Davis, who "mentored" him through his early beard years.

But, today, that's all changed. ESPN.com has reported that James Harden will appear in today's game against the Bulls....completely clean-shaven.

In an exclusive interview with James Harden, we find out what, exactly, made him go for this life-changing decision.

Welcome To Loud City: Let's just get right down to it. What made you shave your beard?

Harden: Well, I woke up this morning and decided that I wanted some Cinnamon Toast Crunch. I haven't had it since I was like 12, man!

Harden: So I finish up the cereal like normal, and I realize I've got to sip up the milk. But it got stuck all up in my beard!

WTLC: And that was the final straw?

Below: The Rest of the Interview, A Picture of Beardless Harden!

Harden: ....stepped into a time machine! 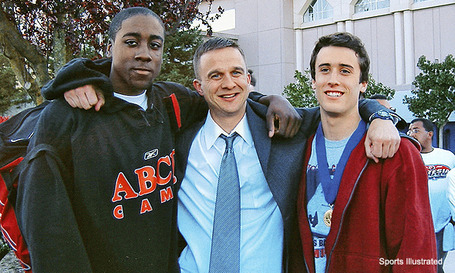