Share All sharing options for: Kate Upton, James Harden, and Kevin Durant: Smile for the Camera

Sports Illustrated Swimsuit Issue cover girl and Carls Jr. aficionado Kate Upton was in the Chesapeake Arena for the Thunder's game against the Suns, and I think I would have been shocked if some of the young Thunder kids did not take the opportunity to get a photo with the swimsuit superstar.

Kate Upton, the Sports Illustrated cover girl, was in the house sitting next to Aubrey McClendon who is her uncle or something. Fun fact: Shooting at the basket where Upton sat under, both teams combined to go just 39 percent from the floor. On the other end? 49.4 percent. Also, the Suns went 9-12 in the first half from the free throw line, while at the Upton end, they missed six. Including a rare one from Steve Nash. Thundor's big jiggling belly is a pretty good distraction, but obviously not as good as Thunder Upton.

So it is with much consternation that I see this pic that James Harden uploaded, featuring Kate, Kevin Durant, and himself, and wonder, what the heck is Kevin looking at? 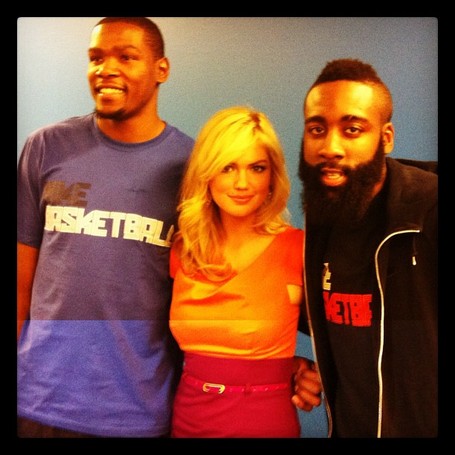 After the jump, an interview that Kate Upton provided during the game.