Russell Westbrook, Scoring Machine: Knows What He Wants, Wants What He Knows

Share All sharing options for: Russell Westbrook, Scoring Machine: Knows What He Wants, Wants What He Knows

Russell Westbrook's latest scoring binge in the past seven days has been both an impressive as well as a little frightening thing to watch. Impressive because in three out of the four games Westbrook played in, he topped the 30 point mark with ease and was the primary catalyst for the Thunder offense. It is scary in the sense that you can actually see Westbrook morphing before our very eyes, understanding the game at a deeper level. It is as if he is starting to realize how he can harness his considerable talents so that they are maximized and not wasted. As a result, two things have become more apparent - Westbrook is scoring the ball easier than he ever has before, and he is much less careless with the ball than earlier in the season (which is most evident by the fact that his turnovers per game has been reduced to 2.7 per outing from 4.7 turnovers only a month ago).

If I may assign one major reason as to why Westbrook seems to be playing so well as of late, I think it is because he, like many young players, is coming into a realization about how to make the NBA game simpler. We're seeing Westbrook make easier passes, play at a slower speed, and take higher percentage shots. Instead of coming at the rim at awkward angles, Westbrook is always looking to get the ball in the same general locations so that his next decision, be it a shot or a pass, is as much a result from repetition and muscle memory as instinct. As we noted earlier in the season, his drive for the simple instead of the difficult has resulted in much more consistent play.

In statistics, there are two words that help describe Westbrook's progress - accuracy and precision. While we commonly interchange the two, they actually refer to slightly different things.

Accuracy - This describes how close to the target you are.

Precision - This describes your ability to reproduce something repeatedly and generate the same result.

It is possible to have one without the other, but great shooters have both - they find their target, and they can reproduce that result with high frequency.

Here is a visual look at Westbrook's shot attempts from three of his last four games: 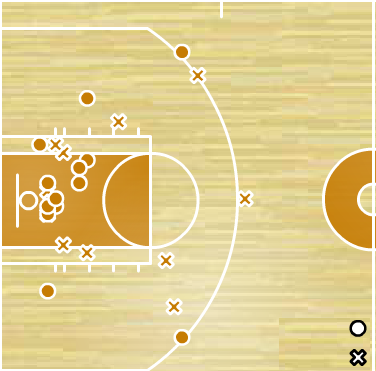 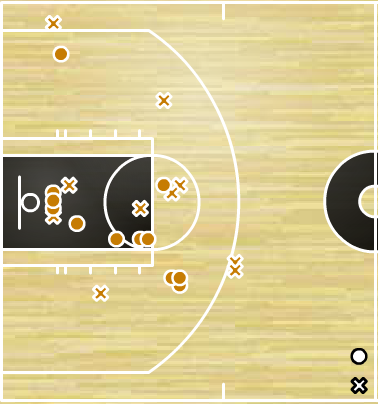 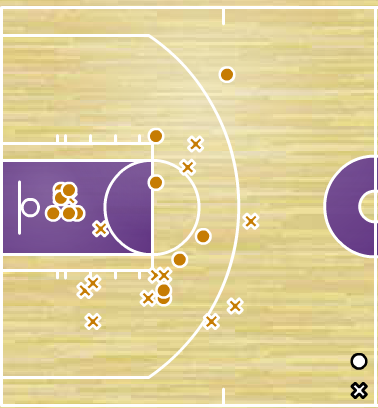 Contrast these games with a far less efficient game against the Spurs. In that particular game, Westbrook scored 36 points, but only shot 13-29 from the field, as the Thunder fell behind early by a large margin in the loss. 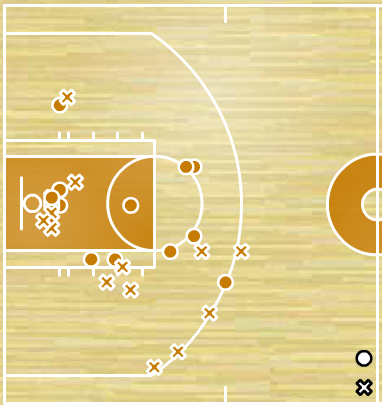