Share All sharing options for: Thunder Constraint Plays and Next Level Play Calling

The smart guys at Hickory High have been handing out some tasty morsels this season and a number of objects of their analysis have involved the Thunder. This is good especially for me since I'm horrible at coming up with interesting theories to test, so I just go ahead and use these guys' models and see where we can add some value. Previously we had looked at the imbalance of the Thunder's pick and roll offense, which told us how heavily the Thunder relies on the pick and roll set specifically to free up the ball handler for a shot. In other words, there is an awful lot of picking and the roller just kind of rolls on down the road for a rebound rather than with the expectation for a potential pass.

The next layer HH adds to this analysis is something that their new stats stud Jordan Kahn applies which is called the Constraint Theory:

The idea behind the constraint theory as applied to the Thunder is that in the NBA, there are only 24 seconds on a shot clock, so there are really only a few potential plays that can be run in about 16 seconds. Since 16 seconds is not very long, the team wants to get the ball into the hands of its preferred shooter with space to shoot in as little time as possible. However, both the Thunder and the team defending the Thunder know this, and they probably also already know all of the potential sets the Thunder are going to run in order to get their key guys (Kevin Durant, Russell Westbrook, James Harden) into open space. So defenses cheat - they overplay the ball handler, they collapse on the screener, and they hope that it clogs things up just enough so that they can hold the Thunder ball handler for an extra second longer to prevent an open look.

Here is one clip that Kahn offers as evidence, where you can clearly see that the Spurs 1) knew what was coming; and 2) knew how to disrupt the open look. A constraint play would force them to think twice about overplaying the offensive threat.

More analysis after the jump.

It is via analysis such as this that the common charge of the Thunder's lack of offensive sophistication begins to take root. In each of the two plays in the embedded clip, the play is to get the ball to Durant at the top of the key (not a bad proposition!). Even when the Thunder add the second screener to make sure the defender stays off of the ball's target, the intended target is still going to be Durant. This play is going to generate a reasonable if not great shot about 75% of the time, because Durant is either going to have the pull-up jumper in his sites or he is going to have a crease where he can attack the rim (the same is true for Harden & Westbrook; they are all interchangeable).

The problem though is what we see above - what if the screens are not great or the defense is too adept at recovery and Durant is covered once again? This is really where complaints against coach Scott Brooks and the Thunder offense heat up because there is no other option available. The Thunder can either re-run the same play (may take too long), or else the ball handler now has about 8 seconds to produce some offense in an ISO situation. Fortunately for the Thunder, their three main guys are very, very good at basketball and as a result, despite the reliance on their luke-warm initial offensive sequence, they are still near the top of the league in offensive efficiency. However, as the playoffs approach and teams get better, this initial sequence is going to work less and less (recall that by the end of the Dallas series last season, Durant was marginalized by the Mavericks' over-extended defense). The Spurs lurk in the West, and in the East both the Bulls and Heat are incredible in their defensive recovery off of ball screens. So what to do? What is the next level?

In these few sequences Kahn diagrams how the Thunder are employing a primary screen and then a delayed screen in order to allow the shooter to elude his man and receive the ball. They are well-designed plays and as long as the Thunder commits to running them with proper spacing and pacing, they will usually spring the shooter free. Also, if the defense sees it coming and tries to overplay on THIS sequence, it will likely come in the form of the defense's big man being forced to rotate up to cover the wing, which means the offense has won out.

There is another option though, and it comes with a deeper understanding of the spacing that gets created and destroyed with these staggered screens. Take a look at the first sequence above after the second screen is set (11 seconds in): 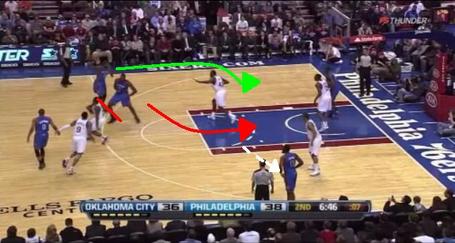 Perkins' job is to hold two men in place long enough for Durant to receive the pass and make a decision. However, the decision KD has is still two dimensional; he can pull up and shoot, or drive. There is no consideration given for the third option, which would be very easy to execute since the Thunder did a great job creating a big pocket of space right in the middle of the lane. If the screener Perkins dives down to the lane instead of just hanging out at the top of the key after the pass (a spot where he is rendered useless if the play is extended), he and Durant have a two on one situation against the high defender, Elton Brand. Simply by having Perkins roll to the rim forces Brand to have to hedge on his close-out against Durant, because he has Perkins rolling to the rim behind him. If he hesitates even for a second, it frees up Durant for a much easier 15 foot shot.

Conversely, if Brand closes hard on Durant, KD has either a bounce pass or a lob he can use to deliver Perkins the ball. If Perkins receives the pass, he too can either a) attack the rim; b) wait for Thaddeus Young to leave Serge Ibaka and then deliver the bounce/lob to Ibaka for the point-blank shot, or c) if Harden's man Evan Turner sees the roller and tries to cut him off from the weak side, Perkins can deliver the ball to Harden a wide open 3-point attempt.

Out of this second staggered screen, there are now four possible scoring options available, all of which would be superior to Durant's one-on-three contested jumper.

Lastly, let's take a look at the final sequence in this second clip. It is almost the identical set, but this time the Thunder have better spacing with Daequan Cook and Harden on the two wings instead of Serge Ibaka on the block. The Celtics are still a very good and intelligent defensive team and know how to close out on shooters. 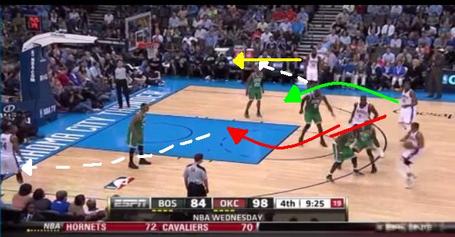 The Thunder have the Celtics set up so that after the second screen, it is essentially a 3 on 3 play, since three players from each side are all clustered together. If the play is for Durant to simply shoot, this is an ill-conceived play because the Celtics have several guys who can close out on Durant (the fact that he hits the shot is incidental; my point is that there are easier shots to be had). However, my rule of thumb is, if you can destroy space in one spot, you create space somewhere else. Once Perkins sets the screen, Brandon Bass and Keyon Dooling are completely out of the play. After Perkins' screen, you see Dooling actually sprint over to Durant, and it is precisely at this point that the defense is broken and the Thunder MUST recognize this reality instead of taking the contested jumper and bailing out the Celtics.

If Perkins slipped behind Dooling and rolled to the rim, Kevin Garnett would be forced to make a choice. He could either close out on Durant (the correct play) or stay with Perkins, which would have left Durant open for the much easier jump shot. If Durant decided to drive the ball, Harden merely would have had to shift down to the corner to pull Ray Allen out of the lane, giving Durant a clear path. If Allen sagged off to help on KD, Durant would have had an easy pass to Harden for the corner 3-pointer.

Lastly, on the weak side of play, if Durant tried to hit Perkins with the pass on the roll to the rim, Paul Pierce too would have had to make the choice to either give up the lane to Perkins for an easy basket or slide to cut off Perkins in the lane but leave Daequan Cook open for a wide open 3-pointer. Again, simply by having the screener roll to the rim, the Thunder would have been presented with four possible scoring options rather than the long contested jumper for which KD settled.

The purpose of this analysis is to demonstrate how the Thunder can better maximize sets they are already using, but their focus has to shift. Instead of setting up a play that is designed to generate a perimeter shot, these plays can be adjusted to offer something far greater - OPTIONS. Added options turn a good offensive team into a great one, and as we saw the Suns and Spurs do to the Thunder defense, turn a good defense into a spinning top. Options give everyone on the team the opportunity to be a threat and the more that happens, the easier the job becomes for Durant/Westbrook/Harden to get their shots when the critical moments arrive.