The Wages of Wins guys are fans of the NBA game and are adept at both analyzing old numbers as well as coming up with new numbers to analyze (Perhaps they were all hard-core mathletes too, but I kid). David Berri's wins produced metric has become part of the advanced stats lexicon and is useful in helping determine a player's contribution to the bottom line - winning games.

Fortunately for us all, the WoW guys keep pushing forward and recently unveiled a new derivative: The Points Over/Under Par metric.

Whereas their primary statistic, the wins produced metric, examines a team's point differential across an entire season and how many 'wins' each player contributes to the team, the PoP metric hones in on how many points each player adds on a per-game basis. The theoretical 'average' player, who neither adds points nor takes them away, has a 0.0 baseline. If a player has a positive number, that is akin to saying that with said player in the game, the team is starting with a positive point spread. Conversely, if the player's number is negative, it is as if they are spotting the opponent a lead.

Since this new metric is more useful on a week by week basis, it is our intention to begin running this post each Monday to see how the previous week's games went. For the week of March 4 - March 11: 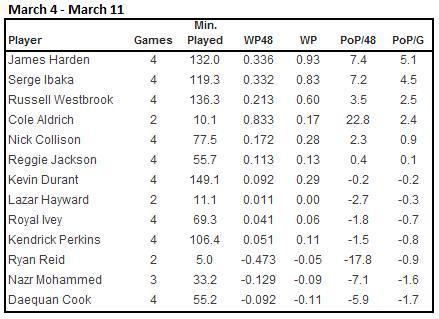 Here is the data year-to-date: 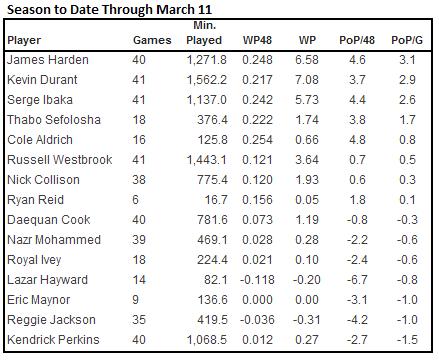 The data sets give us a bit more tangible credence when we think about the Thunder performance over the last week. For example, in watching those four games we know that Kevin Durant has been struggling a little as of late, while James Harden twice set personal personal scoring bests. Since the wins produced metric is based in part on how efficiently a player scores (not just the number of points scored), it makes sense that Harden would rank higher than Durant, since for example in the Suns game Harden scored 30 off of only 12 shots, while Durant needed 27 shots to get the same final point total.

By examining the players' most recent week against their season overall, we also get a sense as to how they're doing compared to their own personal averages.

All data provided by Wages of Wins at www.nerdnumbers.com.