Exclusive Interview With Kevin Durant's Trainer, Justin Zormelo: Training to the Next Level

Share All sharing options for: Exclusive Interview With Kevin Durant's Trainer, Justin Zormelo: Training to the Next Level 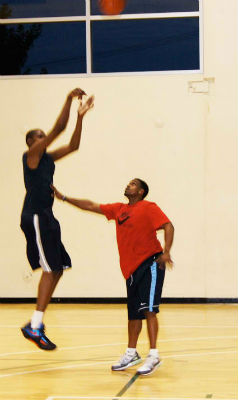 WTLC has a very special exclusive for you today as we gear up for the 2nd half of this NBA season. We recently were able to reach out to Justin Zormelo, founder of BestBall Analytics and personal trainer of Thunder All-Star Kevin Durant. Zormelo's model for training focuses on the individual's basketball IQ and applies revolutionary analytics and training to further develop the player's intelligence, efficiency, and confidence. Zormelo boasts of a clientele that includes Durant and Daequan Cook of the Thunder, as well as five of this season's NBA All-Stars, which includes Dwyane Wade, Derrick Rose, Luol Deng, Roy Hibbert, and Joe Johnson.

WTLC's Ben Luschen sat down with Zormelo to pick his brain on Durant's development, how his analytics system benefits players, and what it takes for players to get to the next level.

Welcome To Loud City: So, you started BestBall Analytics. What separates your company from other basketball training companies? What makes you guys good at what you do?

Justin Zormelo: Well, it's really just myself, there's a couple of other people that work with me. I just try to have a good relationship with whoever I'm working with and try to find their strengths and weaknesses and their goals as a player. I try to assist them in any form they possibly need help in through video consulting or on-the-court training - I just try to tailor it best to their needs. It's kind of different in every case, but I just try to listen to their wants and needs and I try to evaluate them and tell them where I can see some room for improvement.

WTLC: The knock on KD coming into the league was that he wasn't strong, right? Obviously, that hasn't been much of a problem. Do you think he's stronger than people give him credit for?

JZ: Definitely, definitely. You know, Kevin works extremely hard off the court on his body, I don't think he's missed many games at all. He's just a different kind of strong. He lifts hard. He just lifts differently than most people lift for. He's got a lot of strength but its just a different type of strength. He's young, he was 18- years-old [when he was drafted] and now he's 23 and still growing and still developing his body.

WTLC: I heard a radio interview over the summer - Kevin was on - and the host was asking him why he didn't have a low-post game and if he was developing one. Kevin was like, 'Well, I do have one, but it's not always smart for me to use it in the game,' because it would be easier for teams to double up on him. Do you know? How good is his low-post game?

JZ: It's great, he works hard at it. It just depends on when the coach wants to call it for him. Yeah, he shoots 50% this year in the post. Last year he was up 45% in the post. [The Thunder] had two low post guys so they just didn't call his number a lot. It wasn't that he didn't have one. He's shooting 50-some percent this year which, you know, is better than Dwight Howard and guys like that. He works hard at it and he's really effective at it, too.

WTLC: Would you say it's harder or easier working with a scoring champion?

JZ: Uh, it's both. He's the hardest worker I've ever worked with, so I have to keep up with him, you know?

JZ: He can do so much that he's easy to work with and he can do whatever he wants. He's always receptive and willing to do more so it's easier at the same time.

WTLC: We had the lockout this summer, of course. Because you guys had that extended vacation from the league, is there something that you guys tried to focus on more because of that extended time or was it just business as usual?

JZ: No. Business as usual. There was a lot - it was a long period of time with a lot of training going on but we did it as hard as we could. He was dedicated and focused and wants to win a championship, so it was really like there was no lockout for us.

JZ: Yeah, exactly. We didn't treat it as a lockout.

WTLC: Yeah, and because of the lockout, we have this condensed schedule. Because there are more games in a fewer amount of nights, do you think that gives the Thunder any kind of advantage because they're kind of a younger team?

JZ: I would say that of course, being a younger team helps with this type of schedule, but at the same time these guys, at the end of the season, were picked to be up here anyway. It's not like because of the schedule they're doing so well, because there's a lot of other young teams out there. They were in the top four teams and played Dallas to go to the NBA Finals so to say it's just because of the lockout, I don't know if that would be it. They were in the top two teams in the West last year and they're number one in the West this year.

WTLC: I hear KD really likes chicken wings. Do you ever worry about his diet at all?

JZ: Not at all. Not at all. He eats fine. Just like everybody else he likes to snack on whatever he likes to, but do you see his body now? There's no fat on that. He can run for days. I don't even know why people say that.

WTLC: Well, is there anything about his game that maybe he needs to work on? I mean, he's so good now, it's hard for the average fan to see any room for improvement.

JZ: What can he improve on?

JZ: He figures that out on his own.

JZ: He's a great player and he'll figure something out to work on next year that he'll dedicate his time to.

WTLC: On another point, those last second shots. Kevin is hitting a much higher percentage of them this year. Have you seen his mental toughness grow while you've worked with him or has it always been there?

JZ: Yeah, it's always been there, hiding. You can't stop that kid, he's so determined and has supreme confidence in himself, so he's been the same.

WTLC: What do you think makes him so determined?

JZ: I couldn't tell you. You'd have to ask him that. It's unbelievable, his will to win and his want to be great.

WTLC: What is the most important part of being basketball fit, would you say?

WTLC: Is there a most important part?

JZ: I'd probably say the desire to want to be. A lot of guys just become content or just don't have the same hunger or drive and they become not fit. Most guys, when they came into the league, were fit and in shape, so that drive and the dedication and the discipline to do the things that got you there. There's not really set things except just working hard at it and just doing the right things.

WTLC: Is there a player in the league you look at and say, you know, 'he's probably the best example of basketball fitness.' I don't know, Blake Griffin or Dwight Howard?

JZ: Yeah, definitely those guys. I mean, their bodies are just unbelievable specimens. You know, LeBron James. You're just in awe, but they put a lot of work on their bodies, they weren't just born with it. Kobe Bryant, he's 34-years-old and he doesn't miss games at all. Andre Miller - those guys work extremely hard on their bodies.

JZ: Well, I consider basketball a thinking man's game, so I would probably say basketball IQ over fitness. The fitness part, I don't really do too much of, it's just more on-the-court stuff. The fitness part is just all mental and hard work. It's all discipline and stuff like that. 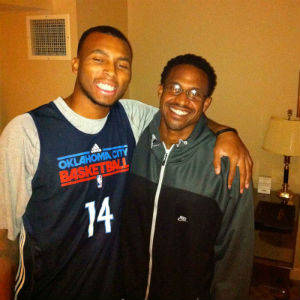 WTLC: You've helped a lot of players. You've been with Tracy McGrady, right?

WTLC: Who are some other players you've worked with?

WTLC: You went to Georgetown and were the manager on the team. Did you learn anything from John Thompson III? You just mentioned you were with the Heat, and obviously Pat Riley has a lot of championships. Did you pick anything up from those guys?

JZ: Oh man, I learned everything from those guys. Just on a day-to-day basis, just watching and interacting with players and watching practice and just listening to them. I learned so much - and then coach Erik Spoelstra at the same time. I just tried to be a sponge and it was definitely a good foundation.

WTLC: What's some advice you would give to a young basketball player right now. Like, let's say Junior High. 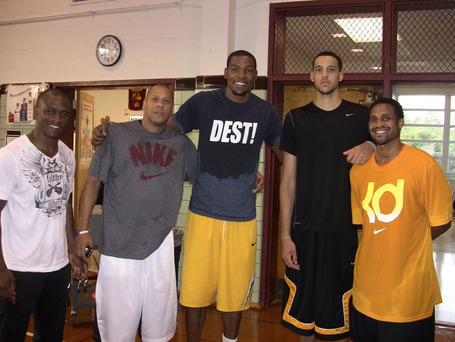 All photographs are the property of BestBall Analytics and may only be reproduced with permission.

Many thanks to Justin Zormelo for taking time out of his busy schedule to converse with us. You can learn more about his company at www.bestballanalytics.com.