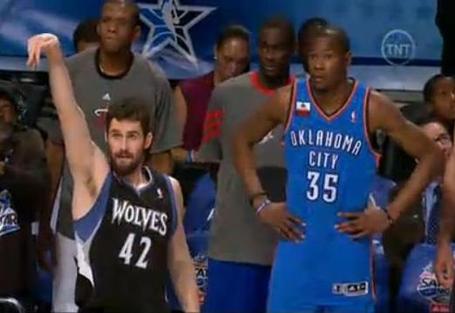 The 2012 All-Star Three Point Shootout just ended, and Kevin Love defeated Kevin Durant in a suspenseful final. Durant acquitted himself well this year after his poor showing a year ago, when he finished last amongst all contestants. This time out, Durant stuck with much better shooting mechanics and it paid off with three strong rounds. Unfortunately for him, Love was up to the challenge and defeated Durant in the final round, 17-14. I am pretty sure that this is the first time that a power forward has ever won this contest, and wouldn't you know it, it happened in one of the most unusual seasons in NBA history.

Special props to Durant, who was a last minute addition for the shootout in replacing an injured Joe Johnson. He didn't win, but he shot the ball well and even had Charles Barkley almost ready to admit that Durant is a better scorer than Carmelo Anthony. Almost.