The NBA unveiled its 2012 NBA All-Star jerseys today. The starting line-ups for the game will be announced during this evening's TNT broadcast, so now we know what those players will be wearing in a few weeks. Starters are selected via fan voting, while the reserves are selected by the respective coaching staffs. There is a good chance both Kevin Durant and Russell Westbrook will be wearing these red jerseys in a few weeks.

The All-Star Game is scheduled to be played February 26th in Orlando. 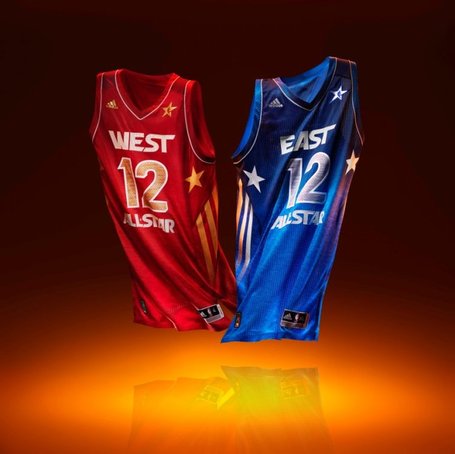 For me personally, I tend to view All-Star jerseys in the negative sense - as long as they don't look terrible, I don't really care what they look like. According to Royce Young, the designers were going for a "Floridia Vibe," which apparently involves making the apparel look old and worn.

Perhaps these more subtle jerseys are a reflection of a greater sense of style in the NBA as compared to the NFL, a league that features jerseys that look like they were pulled off of a 1996 Geocities web site.