Via Ball Don't Lie: "On Monday afternoon, Nike and Jordan Brand released its latest incarnation, the Jordan XX8 (aka 28, for those of you don't recognize both Roman and Arabic numerals in the same construction) at an event in New York City."

On Monday afternoon, Nike and Jordan Brand released its latest incarnation, the Jordan XX8 (aka 28, for those of you don't recognize both Roman and Arabic numerals in the same construction) at an event in New York City.

The shoes, devised by legendary Nike designer Tinker Hatfield over the course of two years, retail for a cool $250 and will make their NBA debut on Tuesday night when Russell Westbrook of the Oklahoma City Thunder plays against the Nets in Brooklyn.

Westbrook signed a deal with Jordan brand shortly before the season started (which even included customized fashion glasses), so that he would be debuting the new Jordans would make sense.

Still, I don't know how psyched I would be about debuting these new "rain boots". I had a pair of shoes made out of this same material in the fourth grade. I was pretty psyched, because they were my first pair of shoes that didn't have velcro or laces on them, so they were super easy to put on and take off. Moreover, they were super comfortable.

What I didn't know is that the shoes would last less than a year. By the time summer rolled around, the shoes were a holey, unrecognizable mess.

This "outer jacket" on the Jordan XX8, I expect, will suffer a similar fate for sneaker lovers everywhere. The logo on the side looks like it's screenprinted, and probably will make the shoe look cheap after 3 to 4 uses. Okay, I know I'm really railing on this shoe, but for $250, I'm expecting quality, darn it!

For all the hating I'm dishing out right now, this shoe is totally Russell. It fits in with his wild sense of style, and the the two different "modes" of the shoe illustrate Westbrook's play on the court. When the shoe is zipped up, he's like passive Russell, working to get shots for teammates and not driving the lane very often. But when the flaps come down, you've got EXTREME Russell, who runs around like a man possessed, gets in passing lanes, drives to the hole, and does things you never thought possible.

I think that in the future, these shoes will be cited as a style extreme that never caught on in the 2010s. Still, you've got to admire the tenacity that it takes to put something totally new out there, however silly it may be. 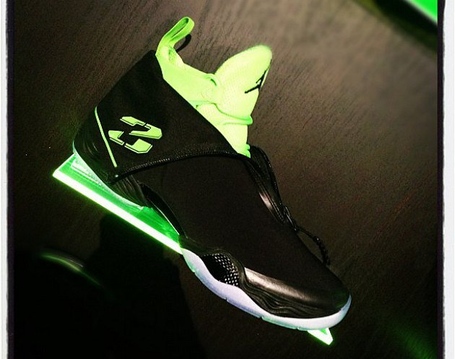