Kevin Love and Nikola Pekovic combined for 52 points as the Minnesota Timberwolves ended the NBA's longest winning streak of the season, defeating the Oklahoma City Thunder, 99-93.

The Timberwolves led from the opening tip and jumped out to a 25-12 lead early in the first. The Thunder fought hard and eventually cut the lead to 3 early in the fourth, but that was the closest they would ever come to taking the lead. Minnesota replied with a short run of their own, putting the game away.

The Thunder were without Kevin Martin, who did not play tonight due a bruised right quad contusion suffered last night against the Hawks. Because of Martin's absence, Reggie Jackson was inserted into the team's second unit, but was unable to provide the offensive spark the team needed, and Jackson finished with only 4 points.

Although it's disappointing to end a winning streak, we all knew it had to happen sometime. Once we knew that, on top of playing a back-to-back, the Thunder would be without their 3rd leading scorer, it seemed like tonight would be the night.

However, the Thunder seemed to completely forget how they had played this entire year. Instead they resorted to the team they were the past couple of seasons. No, not the one that made the NBA finals, the one that made you pull out your hair and yell at the TV. At times tonight the team seemed frantic and careless, which goes to show what can happen when the chemistry of a team is disrupted.

Without Kevin Martin, OKC lost a key member of their offensive unit. Martin allowed the Thunder to spread the floor, which led to better point distribution. Tonight, Durant and Westbrook tried to bare scoring burden for the team. Without any other scoring threat on the floor tonight, the Thunder lacked offensive efficiency. The Thunder are at their best when everyone is involved on both ends of the floor. Unfortunately tonight that wasn't the case.

Two things stuck out to me tonight. Westbrook ended up with 8 turnovers tonight. We've seen Russ make significant improvements in limiting turnovers, but tonight he seemed like his old self.

The other number is 16, which is the amount of points everyone besides Durant, Westbrook, and Ibaka combined for. Throughout the 12 game winning streak, we typically saw 5-6 players score in double figures. Tonight it seemed to be a 2-man show for the Thunder.

The loss itself hardly means much for the Thunder, as they still have the best record in the NBA. How the Thunder lost seems to be more troubling. The offense seemed clueless at times without Martin on the floor. Also, I expected Scott Brooks to maybe look towards Perry Jones III or Jeremy Lamb, but their lack of playing time tonight seems to indicate they are farther down the depth charts than we thought.

The Thunder have the next four days off before traveling to Miami in a rematch of last year's NBA finals. A win there would more than make up for tonight. 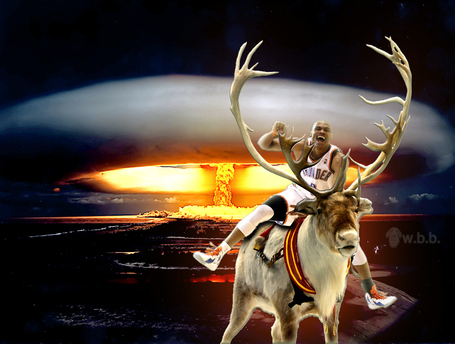