Quick recap: the Thunder avenge an early season loss, putting away The Spurs, 107-93

Serge Ibaka led the Thunder with 25 points, and Russell Westbrook had 22, and the Oklahoma City Thunder avenged their season opening loss, defeating the San Antonio Spurs 107-93.

Last time these teams met was in the season opener, where Tony Parker hit the game winner while the Thunder were still trying to adjust to their post-James Harden lineup. Now, the Thunder have just won their 11th straight, and move 2 up in the battle for the top spot in the west.

Tony Parker and Nando de Colo both led the Spurs with 14, with Tiago Splitter and Tim Duncan each scoring double digits.

Over the last year and half we've seen some great battles between these teams. Last season the Thunder eliminated the Spurs from the Western Conference Finals. Anytime these two teams play it's going to be a big deal, with home court advantage implications on the line.

What was most satisfying about this win is finally seeing proof that the Thunder has been able to improve over the first quarter of the season. Kevin Martin has become more accustomed to his role and Serge Ibaka has taken a larger presence in the team's offensive game.

It's no secret that the Thunder have a many offensive weapons. Despite that, every member of the squad must be ready whenever the team needs him. Reggie Jackson showed that last week, and Serge Ibaka did that tonight. A year ago no one could have predicted that Ibaka would ever lead the Thunder in scoring in a game, but since Westbrook and Durant shot under 50% tonight, the points needed to come from somewhere. Ibaka was not only able to do that, but also show just how complete of a player he has become.

While a specific statistic fails to separate the two teams, one man's stats did. Serge Ibaka put together an amazing game, finishing with 25 points, 17 rebounds, and 3 blocks. Stephen Jackson called out Ibaka earlier this season. Even though the two didn't meet tonight as Jackson was out with an injury, it appears it got the defending blocks champion fired up.

For those looking for where the Thunder were able to separate themselves from the Spurs, OKC had 27 points from the line, compared to 14 from the Spurs. OKC was also able to dominate the boards, out-rebounding the opponent 49-37.

We've talked about how much the Thunder has improved throughout this season. For those still needing convincing, you got it tonight. Last time we saw the Spurs was the first game after the James Harden trade, and OKC lost by two. This time, the team looked in sync and led comfortably for much of the game.

The Thunder are now 2 games up on San Antonio and the Clippers for the top spot in the west. The Thunder begin a tough 3 game road trip, starting with the Atlanta Hawks, who also beat the Thunder earlier in the season, followed by a trip to Minnesota and then Miami on Christmas day. 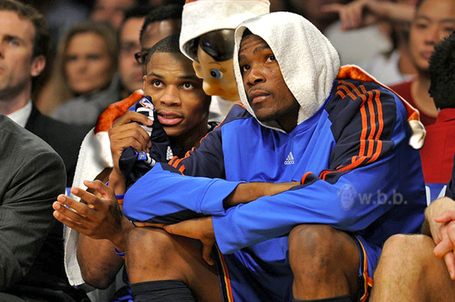