Quick recap: The Thunder struggled most of the night but came alive in the 2nd half to catch the Hornets in the end, 92-88.

At the Hive Quick Recap

The Oklahoma City Thunder defeated the New Orleans Hornets, 92-88. In a game where the Hornets used a classic slow-down technique to take the air out of the high-scoring Thunder's sails, New Orleans led almost the entire way, up by double digits for a good portion of the 2nd and 3rd quarters. The Thunder managed to catch them in the 4th quarter, but even then it was a back and forth affair right up until the final buzzer. With the Thunder clinging to a 1 point lead, Kevin Durant could only convert 1 of 2 free throws to give the Hornets a chance to either tie or win in the end. Fortunately for the Thunder, Greivis Vasquez missed an off-balance 3-pointer with 2 seconds remaining that could have given New Orleans the win. Thabo Sefolosha's free throws were the last contribution to the final score.

The Thunder were led by Kevin Durant, who scored 35 points on the night, including 12-14 from the free throw line, while grabbing 9 rebounds. Durant was greatly aided in the 2nd half by Kevin Martin, who finished with 17 points and 6 rebounds.

The Hornets were led by backup point guard Brian Roberts, who finished with a team-high 16 points, including 4-6 from 3-point range. Rookie Anthony Davis, finally back from injury, scored 11 points and grabbed 4 rebounds.

My initial reaction is that the Thunder once again were able to avoid a trap game by being patient through their early game struggles. The team remembered, despite being down by 8 points at the half, that there was plenty of time to recover. Patiently, OKC worked their way back into the game and took the lead in the 4th, and managed to put just enough points on the board to give them the spread they needed to hold off the Hornets.

My second reaction though is that I have to give props to the Hornets for coming into the game and executing a very sound game plan. New Orleans only averages 91.5 points per game while the Thunder average 106. Playing to their averages, there was no way that the Hornets could win. To counter this disparity, the Hornets took a page out of the Dallas Mavericks' game plan against OKC by slowing things down on their end and allowing the Thunder to play too fast on the other end. It is a risky gambit, since if OKC is hitting shots it will lead to a blowout. However, if the Thunder are not hitting their shots, they tend to play too fast, waste possessions with quick shots, and lose their considerable advantages. The strategy worked for most of the game, and had Vasquez gotten a better look at the end, we might be calling this a huge upset. When you're the underdog, you have to: a) have a game plan; and b) execute it almost flawlessly. New Orleans came darn close.

The Thunder showed tremendous poise in this game by being patient in the 2nd half and waiting for their opportunity to get back into the game. This kind of patience was absent even a year ago, when OKC would find themselves trailing to a lesser team and instead of playing the averages, would instead play recklessly and end up with the loss. This time out, they were much more self-assured and knew that they had the talent and ability to get back in the game one play at a time. They simply had to wait for the right combination of players and plays to materialize that would give them the push they needed.

To be sure, Kevin Durant came alive in the 2nd half, scoring 25 of his game-high 35 points. More importantly, he recognized early on that the normal shots were not falling. Just like in their last win against the Pacers, Durant worked his way to the free throw line again and again to manufacture points. Meanwhile, his all-star teammate Russell Westbrook too recognized that his offense was out of sorts. After struggling to a 2-11 first half shooting the ball, Westbrook showed remarkable restraint by attempting only 3 shots the rest of the way, making 2 of them. His willingness to ease off the gas allowed other players such as Kevin Martin and Nick Collison to put some much needed points on the board.

Speaking of other players, the Thunder finally got the push they needed to get back into the game by using a seldom-used small-ball lineup, which included Reggie Jackson playing along side backup PG Eric Maynor while Westbrook was on the bench. Jackson responded by drilling a 3-pointer at the end of the 3rd which pulled the Thunder to within 4 points. Jackson followed up by blocking Xavier Henry's shot early in the 4th. Four possessions later, the Thunder had retaken the lead.

While it might seem like a small thing that Jackson was on the court for a solid 11 minutes, during which time the Thunder regained their composure and retook the lead, in reality these are the kinds of moments that young players on good teams have to sieze. They have to sieze these moments for two reasons: 1) they need to convince their teammates to believe in them; and 2) good teams win games they aren't supposed to because seldom-used players like Jackson find the courage to step up and step into the moment. Last season we saw rookie Norris Cole have some huge moments in helping the Miami Heat win a championship. Sometimes the small guys have to step up. Tonight, Jackson did just that.

As long as the Thunder continue to fly toward the playoffs on the backs of Durant and Westbrook's offense, they are bound to have clunker games like this one, where for 2 to 3 quarters everything stinks. The good teams though, the championship teams, figure out how to win these types of games.

Aside from the push that the Thunder 2nd unit gave the team, the other most significant development that I saw was that, when OKC was struggling, they went to bread-and-butter plays with Durant. They slowed down their offense, kept things simple, and allowed the world's best scorer to BE the world's best scorer. The plan didn't lead to a similar blowout that we saw in the first two times OKC and New Orleans met, but it did result in a win. Sometimes, that is enough. 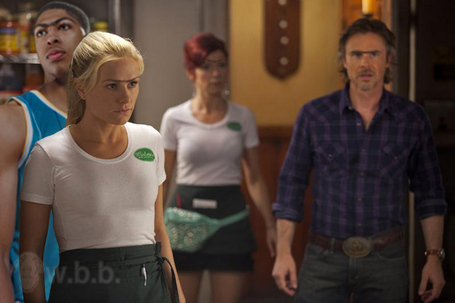 Thunder Down Under: Kevin Martin, 17 points, including 12 in the 2nd half

Next game: vs the Sacramento Kings on Friday, Dec. 14 at 7PM CDT