Stephen Jackson apologized to Serge Ibaka, but the league and his own team still condemned Jackson's public comments.

The Spurs' Stephen Jackson found himself in hot water after tweeting a message directed at Serge Ibaka. Unsurprisingly the NBA was not too happy on such a public comment, which the league found to be a "hostile statement." Also not surprisingly, Spurs GM R.C. Buford condemned the comment:

"The recent public comments made by Stephen Jackson are absolutely unacceptable, cannot be tolerated and do not reflect the standards held by the San Antonio Spurs."

The NBA fined Jackson $25,000 and Jackson, who deleted the tweet, apologized: 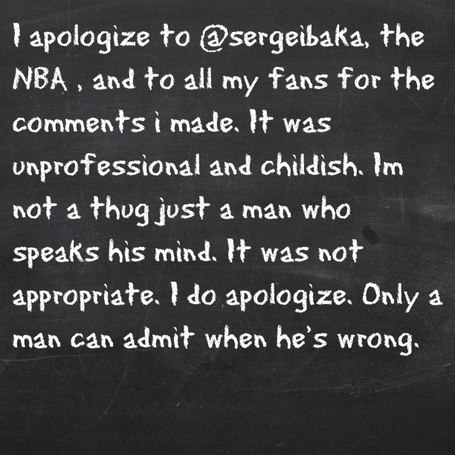 "I apologize to Serge Ibaka, the NBA, and to all my fans for the comments I made...It was unprofessional and childish. I'm not a thug just a man who speaks his mind. It was not appropriate. I do apologize. Only a man can admit when he's wrong."

As for Ibaka's reaction, he chose not to get involved in any sort of public dust-up. According to Daily Thunder:

Asked about Jackson’s comments Sunday, Ibaka had no reaction.

"I don’t want to talk about it right now," Ibaka said. "I didn’t see nothing, I didn’t hear nothing."

When pressed lightly on the subject, Ibaka literally held both hands up and said, "I don’t want to think about it."

Kendrick Perkins, who is buddies with Jackson, said he'd look into it: