Quick Recap: The Thunder easily handles Harden in his return, defeating the Rockets 120-98.

The Oklahoma City Thunder, led by Kevin Durant's 37 points, defeated the Houston Rockets 120-98 in James Harden's first game in OKC since being traded exactly one month ago.

James Harden received a standing ovation prior to the game, but struggled to get anything going against his former team, starting the game off 0-9. However, Harden was able to get to the line often, and earned a majority of his points from the stripe.

An example of Harden's frustration came early in the second, when Hasheem Thabeet and Harden (the #2 and #3 picks in the 2009 draft) got in a brief altercation after Thabeet blocked two of Harden's shots (Thabeet was temporarily ejected on the play). The only thing keeping the Rockets in the game was the low post dominance of their front court.

Patrick Patterson lead the Rockets with 27 points, while Omer Asik added 17 points and 12 rebounds. Jeremy Lin, who appeared in his first game against the Thunder, finished with 6 points and 8 assists.

Once James Harden's trade to the Rockets was announced everyone immediately circled this date on their calendar. Houston went through some other massive changes during the off season, adding PG Jeremy Lin and big man Omer Asik through free agency before trading for the sixth man of the year. After finally seeing how the crowd would welcome Harden back home (mostly cheers with a few boos), the Thunder put together another impressive defensive performance.

The Rocket's had a pretty exhausting 24 hours, both physically and emotionally. After beating the Raptors in Houston last night, the Rockets boarded a plan to Minnesota to attend the funeral of head coach Kevin McHale's daughter this morning. After the services, the team then flew to OKC, arriving just hours before the game.

Thabo Sefolosha's previous experience guarding James Harden in practice proved key tonight holding Harden to only 3-16 shooting. While Sefolosha was busy containing Harden, the Rockets were without their best Durant-defender, Chandler Parsons (out with an injury), which allowed KD to go 13-22 from the field and match his season high of 37 points.

The Thunder bench, led by 17 points from Kevin Martin, outscored the Rocket's reserves 33-13. Hasheem Thabeet, who scored a career high on Monday night, had 0 points and was briefly ejected after a scuffle with Harden. The refs ended up reversing the decision after looking at the replay, allowing Thabeet to return from the locker room.

Just 4 days ago Harden scored 33 on 15 shots against the Knicks. Tonight it took him 16 shots to get 17 points. Even more surprising was the fact that he wasn't even the best former Thunder player on his team tonight. Deaquan Cook, who got his first start of the season, finished with 18 points, and 7 rebounds.

The Thunder are now 2-0 in this 3 game home stand, winning 5 of their last 6. While much of the start of this season focus on how OKC would react to losing the sixth man of year, tonight's victory hopefully closes that chapter. With the amount of emotions surrounding tonight's game, anything could have happened tonight. The Thunder, already 3 games up in the Northwest, will host divisional rival Utah on Friday. 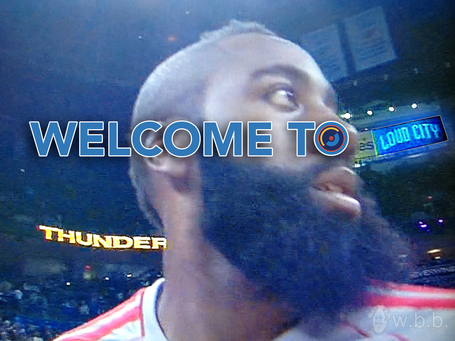