It was tough and it was nasty, but after a night of grind it out basketball the Thunder finally emerged victorious. Should we be worried about the Thunder's inability to close it out in the fourth? They had a 5 point lead with a free throw coming at 1:44 to go, after all.

It was tough and it was nasty, but after a night of grind it out basketball the Thunder finally emerged victorious. I don't know if it was just me, but the fourth quarter of this game just seemed like an endless stream of free throws. The Clippers went to the line 11 times in the fourth, for a total of 21 shots and the majority of their fourth quarter points. By the end of the fourth, the Clippers had gotten the Thunder so frustrated that they dedicated all of their defensive effort to closing the paint. The result was two rather open shots for Matt Barnes, and the Clippers sending the game to overtime.

Should we be worried about the Thunder's inability to close it out in the fourth? They had a 5 point lead with a free throw coming at 1:44 to go, after all. Their offensive possessions went like so: Made Ibaka jumper, Missed Ibaka jumper, and a Missed Westbrook jumper. The second Ibaka jumper was kind of stale, since it was from the exact same spot on the floor he had hit just a play ago, but it was a reasonable shot, and I don't fault him for taking it. The Westbrook layup looked bad, but with the Clippers playing tight man to man defense, it only made sense for Westbrook to try to use his size on Paul. Only problem was, Ibaka was standing in the lane, making it easy for Matt Barnes to anticipate the play and block the shot.

Defensively, as I described above, the Thunder simply missed their assignments. Thabo Sefolosha didn't realize Durant had switched onto Jamal Crawford, so he wasn't able to get to the wide-open Matt Barnes in time. Chris Paul's trip to the line was a result of his ability to draw the jump-happy Ibaka on the perimeter. The second Barnes play was again a defensive miscue, where Durant went in to play help defense against Chris Paul, while Barnes sat on the perimeter unguarded. You can find pictures of the two plays where Barnes scored below. 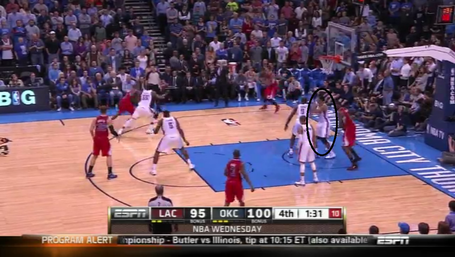 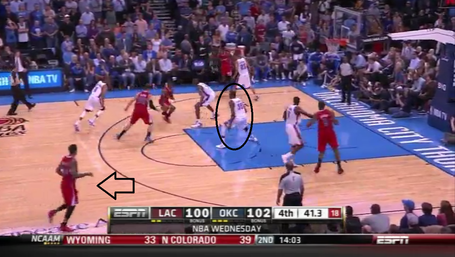 Okay, so should we be worried? Well, I'm not too concerned. After the end of regulation, the Thunder had a marked shift in their defensive strategy. Yes, they were still looking for the easy steal. But they only pressured on the strong side of the court, meaning that they were less likely to have a shooter wide open on the other side. Sure, this meant that the Clippers had more of an opportunity to get into the paint. But even though DeAndre Jordan got two easy baskets as a result, the Thunder were still playing big, and it was unlikely that a guard like Paul would have been able to get through. This forced the Clips into a lot of bad shots, especially towards the end of OT, giving the Thunder a relatively comfortable victory.

So no, I'm not concerned about our mini-collapse at the end of the third. The Clippers are an excellent team, and the Thunder made a few mistakes. It wasn't a matchup problem or anything like that, it was just a few mental errors that are easily fixable. They did well to close out the Clippers in overtime, and I'd count it as a really solid victory.

But let's look beyond the final minutes.

The biggest story to come out of this game, in my mind, was Kevin Martin's improved defense. He actually got a couple of open court steals tonight, making for his highest total of the season. Of course, he immediately turned over his second steal for an easy Clipper bucket, but that's beside the point, I guess. He did a decent job of guarding Jamal Crawford the few times he was forced into that matchup, and he had a couple of nice shot defenses against Eric Bledsoe. However, I will say that for the vast majority of the time he was on the floor, he was guarding the guy who was least likely to shoot (either Green or Bledsoe), so his good defense is really limited to a few key moments that stick out in people's minds.

Throughout the game, it really seemed that whoever happened to hold the upper hand was the team with the advantage in the paint. There were a whopping 29 offensive boards in this game, and the Thunder's bench bigs were really able to make an unprecedented contribution, combining for 18 points and 5 offensive boards. Thabeet's 10 points alone tied his career high. Both teams went back and forth in terms of paint success, but needless to say, Griffin and Jordan came up big in that department for the Clippers.

Still, I feel like the real difference-maker tonight was Kevin Durant. He had some really crucial points down the stretch, and even though he had some senior moments defensively, he more than made up for it offensively. One of the few flaws with this Clipper team is that they don't really have a shutdown defender. Sure, some of their guys aren't bad, but nobody came close to bothering Durant, who scored at will when he wasn't turning the ball over.

You could also point to the absence of Caron Butler, which really raised the profiles of Matt Barnes and Lamar Odom. Barnes performed admirably, but he's not as good from long-range, and he probably rushed a few shots that he shouldn't have. Odom was a good rebounder and defender, but he's a long way from the offensive presence that he used to be. It's arguable that the Clippers could have used Butler to help their offense, especially considering the work they did on boards and how well they limited turnovers.

Watching for the Lineup of Death:

I'm going to start a regular feature in these recaps, where we look at what has proven to be the Thunder's most abysmal lineup so far in Thabeet-Collison-Sefolosha-Martin-Maynor. We'll see how they fare from game-to-game, how often Brooks uses them, and hopefully gain some insight as to why they're so bad.

Tonight, the Lineup of Death saw some limited action at the tail end of the first quarter, the end of the third, and the beginning of the fourth. They had a net +/- rating of -2, all achieved during their second stint.

Their first appearance wasn't really much to talk about, with Martin missing a well-guarded three, and Chris Paul failing to create anything for the Clippers on two iso plays. However, their second stretch was a lot more interesting. Collison was able to get it to Thabeet for a quick post dump. The Clips immediately responded with an equally lucky play, where Blake Griffin airballed a shot and Ryan Hollins rebounded it for a free basket and foul. The next two offensive plays were basically bad Kevin Martin isos. Matt Barnes blocked one attempt, and the other was miraculously tipped in by Nick Collison. The Clippers turned it over once, and Jamal Crawford hit an insanely long three in Sefolosha's face. The last play the lineup ran was a pass to Thabeet, who was unceremoniously NBA Inside Stuffed in the paint.

When you really look at it, this lineup was lucky to do as well as they did. They were able to have some success against Hollins and Griffin in the paint, but one of their scoring plays was a complete miracle. Their defense was adequate, but their defense doesn't really factor into my complaints about this lineup. Overall, I think that if they had more time on the court, they wouldn't have done as well as they did.

Thunder Down Under: Kevin Martin, the Consistent Scoring Wonder

Thunder Blunder: Kendrick Perkins and his offensive 0fer on a night where Thabeet scored 10.