Lessons in screening: how the Spurs won while the Thunder failed

The Thunder loss to the Spurs came down to two plays. The Spurs play worked and the Thunder play did not. Here is why.

Share All sharing options for: Lessons in screening: how the Spurs won while the Thunder failed

The Thunder's strategy was to hold the ball until about 10 seconds were remaining on the shot clock and then run Kevin Durant off a staggered screen in order to free him up at the left elbow. This is the set-up: 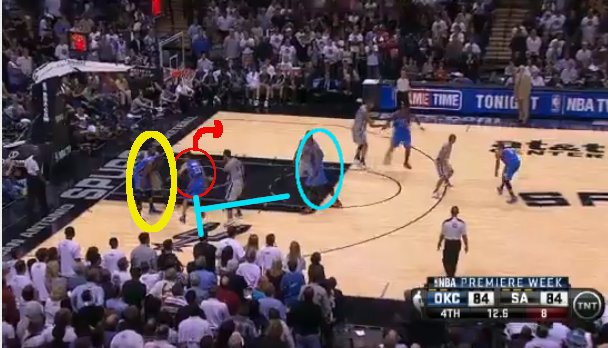 Durant is in yellow and is waiting on the left block. Kevin Martin, in red, initially fakes the screen and then runs weak-side in order to clear out his man. Next, Serge Ibaka (blue) comes to Durant to set a pin-down screen.

If you fast foward a few seconds, you can see how successful the pair of Durant and Ibaka were: 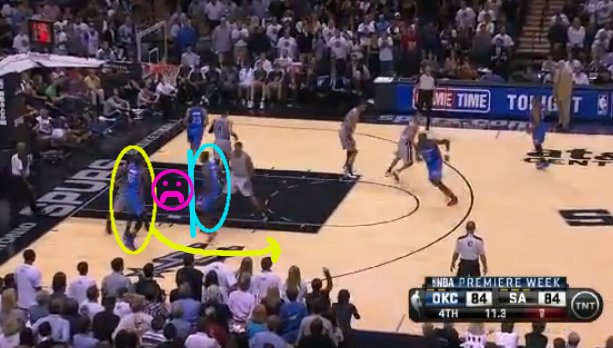 My pathetic looking frowney face underscores the fact that this is a terrible screen, and it is the fault of both Durant and Ibaka. Durant disengages from his man Kawhi Leonard way too early, as Ibaka is still a good 5 feet away and has not yet set his feet. There is too much space between the two men and it is easy for Leonard to just run around the screen and catch up to Durant; all Ibaka can do is subtly turn his back into Leonard and hope for some contact without drawing an offensive foul. The first leg of the staggered screen has failed.

The second leg of the staggered screen involves Kendrick Perkins: 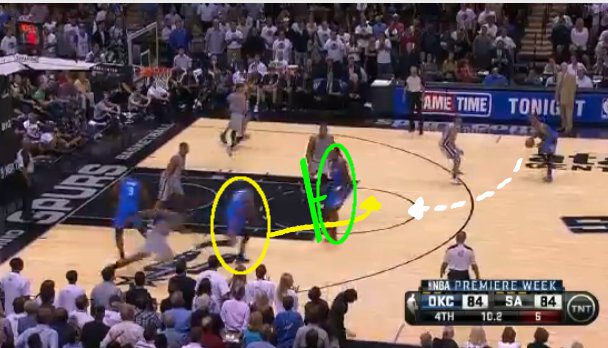 Perkins is to set his screen on at the corner of the free throw line, allowing Durant to curl around it and receive a pass from Russell Westbrook.

However, as we saw above, Leonard has barely been slowed and will be able to close on Durant easily unless Perkins picks him off. In this case, it is imperative that Durant come as closely to Perkins as possible so that there is no space available for Leonard to run through. With Leonard successfully screened, Durant can catch the ball cleanly and attack the defense, and he has all kinds of options. 1) Durant can shoot the free throw line jumper; 2) he can look to see if Ibaka's man leaves the baseline to help out, thereby leaving Ibaka open under the rim for an easy lob; 3) he can check to see if Perkins' man stays with him, thereby leaving Perkins open for a screen and roll to the rim. All three options guarantee a great opportunity to score.

Of course, that isn't what happened: 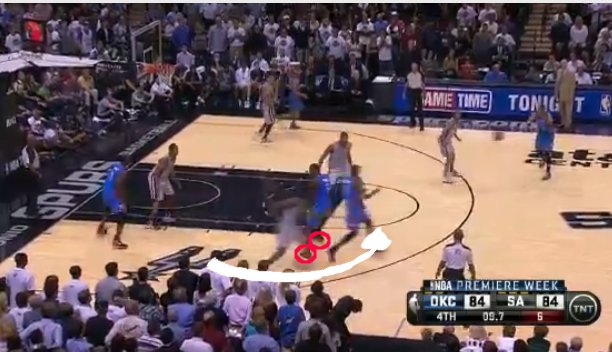 In the first Perkins screenshot, you can see that he has set up his feet inside the extended lane. That is the place where Durant needs to run through. However, Durant takes a much more circuitous route, and pulls Perkins a good 5 feet outside of the lane in order to try and slow down Leonard. If Perkins had made any contact, he probably would have gotten the offensive foul. Instead, Leonard runs through both screens with ease and closes on Westbrook's pass. Westbrook throws the ball to the correct spot, but Leonard, who busted his butt throughout the play, beats Durant to the spot.

Let us contrast the Thunder play with the Spurs' play, which starts at 3:32 in the video above. You can see that the play is designed for Tony Parker, who starts out on the right baseline. 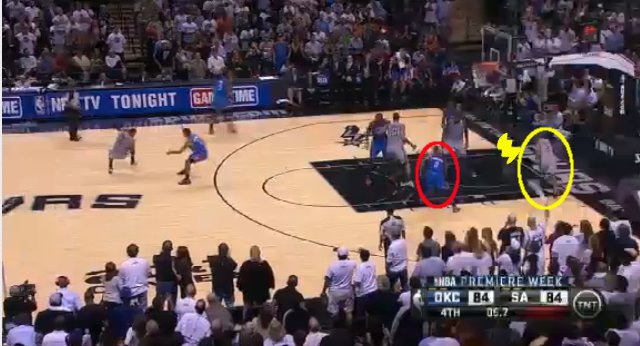 Westbrook is going to play the goat in this stretch, but he's certainly not alone. Parker has been playing hide and seek in this set for a decade now, and he runs it to perfection. Parker runs behind a double-screen in the middle of the lane, looking like he's going to swing out to his favorite left side of the court.

This next frame here, frozen in time, represents the beauty of a Spurs offense that has been running together forever: 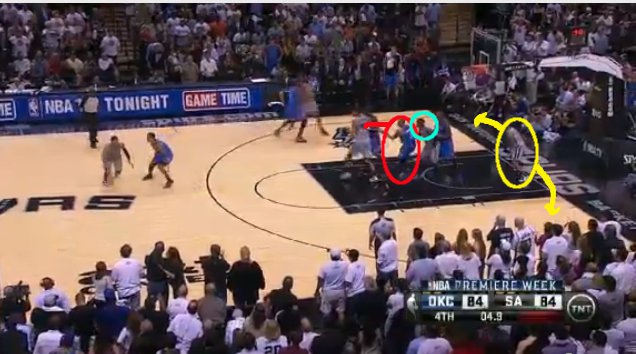 Everything in this split second is an act of misdirection. Take it all in:

1) Danny Green reverses direction with his dribble, making it as if Parker is going to fake left and cut back right.

2) Parker has come to a standstill and gives a subtle but noticeable shake with his head and shoulders as if he's going to cut back.

3) Westbrook is making the classic error that defensive backs make in football; he's looking into the backfield and not playing his man. He has allowed 8-9 feet of space between himself and Parker, and most importantly, he is not even looking at his man to be able to react properly.

4) This is my favorite part - Stephen Jackson has bodied up against Westbrook and is angling himself as if he is going to screen Westbrook from cutting back to the right wing. Westbrook, feeling the screen coming, fights through it. However, that's not the direction the ball is going, and Westbrook fights through a screen to nowhere. 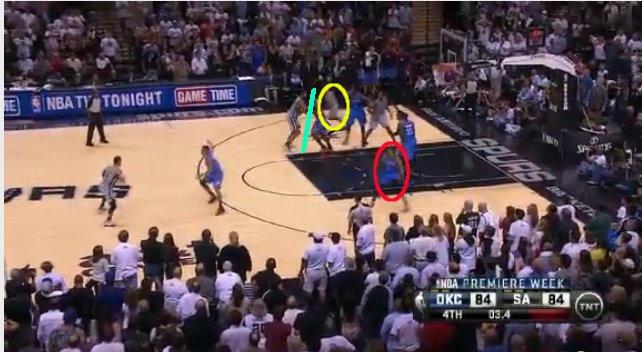 Westbrook is now in no man's land and his man Parker is curling around Tim Duncan's screen on the opposite side of the court. Every Thunder player's motion is heading right while Parker is veering left, and Parker sets up HIS teammate, Duncan, perfectly to screen out Perkins. This is a subtle difference between a well-oiled offense and an average one. In an average offense, the screener sees himself as the guy who has to set up the man with the ball. In the Spurs' offense, the receiver, Parker, is setting up his screener so that Duncan can seal off the defense.

In a final masterstroke of execution, Parker knows exactly how much time he has left and instead of hoisting a quick 3-pointer, Parker pivots a few feet in and to the left, right into his sweet spot.