Quick recap: the Thunder endured another painful loss at home, as the red-hot Grizzlies came in and used a dominating 2nd quarter to get a big conference win.

The Memphis Grizzlies defeated the Oklahoma City Thunder Wednesday night by a score of 107-97. Using a huge 2nd quarter where the Grizzlies reversed a 10 point deficit and turned it into an 11 point halftime lead, Memphis was able to keep the Thunder at arm's length for the rest of the game. After the half, the scores were practically even at 52-51 with a slight Thunder advantage. If OKC had played just mediocre in the 2nd quarter, they likely would have been in a position to win in the end.

The Grizzlies, who pulled off the big road win, were led by Rudy Gay, who scored 28 points on 12-21 shooting, while grabbing 6 rebounds and handing out 5 assists. Zach Randolph was also a menace down low, scoring 20 points while grabbing 11 rebounds.

We could see this one coming. And yet, the Thunder still could have had a chance to pull off the win.

We saw this one coming because OKC had been playing extremely inconsistency for the first 2 weeks of the season. Russell Westbrook in particular has had difficulty finding his shooting touch, and tonight once again Westbrook shot a low percentage, shooting 6-19 for 17 points. Westbrook did hand out 13 assists and only committed 2 turnovers, but it is becoming clear that if Westbrook isn't scoring well, the Thunder look off-kilter. We saw the Thunder barely be able to come back against the Pistons, and tonight they faced a team that was too good to catch in the 4th.

Even so, the Thunder did not as a whole play all that poorly, but were undone by the 2nd quarter. If you compare the two teams' statistics, they are very similar except for one area - the Grizzlies attempted 21 more shots than the Thunder and made 9 more of those shots. Those additional shots manifested themselves in that 2nd quarter when the game got completely flipped upside down. If OKC had simply played about the same as they had the other 3 quarters, they would have been down only by a few possessions in the end.

After one quarter, the Thunder led by 10, 30-20. After two quarters, the Thunder trailed, 56-45. It's math. In the course of an NBA season, these kinds of quarters happen all the time. One team gets hot while the other team goes cold. It has happened before and it will happen again.

What made this loss different is that we got to see first hand what many analysts have been writing about - the Grizz are finally pairing their aggressive perimeter defense with a much better offensive system. They are getting solid scoring consistently from places long forgotten. Rudy Gay, who has a little bit of Westbrook in him, scored a team-high 28 points, all but nullifying Durant's season-high point total. Mike Conley continues to evolve as a very good point guard, consistently setting his shooters up for open looks. And of course they still have their banger brothers down low, with Marc Gasol and Zach Randolph working their high-low sets to great effect.

Two distinct statistics jump out at me:

Durant finally showed a bit of urgency in his offensive approach, and as a result he scored 34 points, including 9-9 from the free throw line. Unfortunately, Gay matched Durant point for point during most of the night, including 9 points in the 4th.

Gay has struggled to live up to the lofty expectations placed on him and the Grizz faithful remain dubious of his consistency, but for this night, his production was a huge reason why Memphis was able to win on the road.

2) The Thunder bench came up small.

The Memphis bench combined for 31 points, including 5-10 shooting from 3-point range by Quincy Pondexter and Jayred Bayless. Their timely shooting far outpaced the Thunder bench's effort, which tallied a paltry 12 points off of 3-13 shooting. Kevin Martin in particular played 33 ineffective minutes, managing to take only 4 shots on the night, making 1.

The poor bench play at the beginning of the 2nd quarter allowed the Grizzlies to go on a 16-6 run through the first 5:30, nullifying the Thunder's strong start. The Grizz bench then buoyed their offensive effort even further, pushing a tie game into a double-digit lead at the half.

The Grizzlies are a better team than the Thunder right now. We kind of knew that heading into tonight's game, but the outcome of this home loss verified it.

Memphis' superiority aside, this game revealed a number of things which the Thunder still must improve upon:

In the end, this was not a terrible loss. However, it did reveal or confirm some things we suspected about OKC and now they must go about making the necessary adjustments.

Thunder Blunder: Kevin Martin, who took only 4 shots in 33 minutes of play and scored 7 points.

Next game: at New Orleans Hornets on Friday, Nov. 16 at 7PM CDT 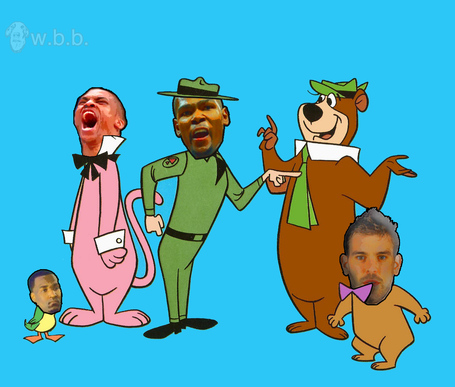