In the spirit of Halloween, James Harden endures his ultimately doomed contract negotiations with the Thunder while being confronted with ghosts from Houston's past.

James Harden, coming off an Olympics that concluded with a gold medal and an equally epic yacht party, strolls into Sam Presti's office with an unwavering confidence. He wants to stay in Oklahoma City, but he also wants a max deal. After all, he's the NBA's best sixth man and a budding pop culture icon. In his mind he knows it, he can feel it in his bones. This is going to be smooth and easy. KD and Westbrook signed great deals in the recent past, so why would this be of any concern? 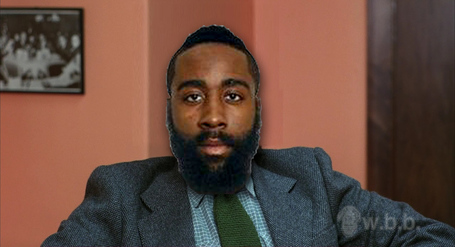 Having a seat across from Presti's desk, they exchange pleasantries and get down to business. Presti, the Thunder's almost supernatural general manager, is affable but blunt with Harden. Intrigued, he listens closely. 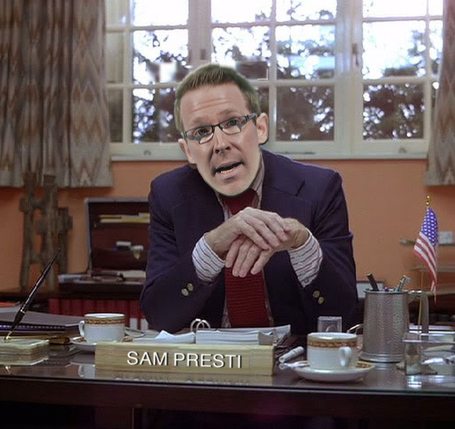 "James, you're a great player and we're going to do everything we can to keep you in OKC. All you'll need to do is come down a bit from the max deal you're wanting and everything should be fine. Before I let you go, there is something I should tell you about. I suppose Scotty didn't tell you about the incident we had here a few years back? We had a couple of players, good guys…good employment record. They came into OKC and things seemed completely normal, but some point during the winter things ran amok and they ended up in Boston. A terrible tragedy, but I thought you should know about it." 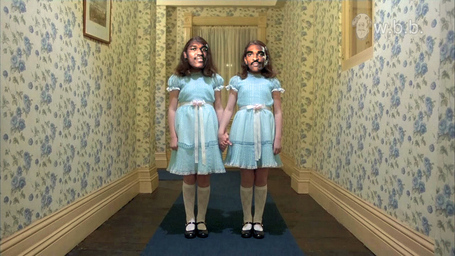 Harden left the meeting, and while still confident that he could get a max deal it didn't seem like the lock it was earlier in the day. There was an odd stillness in the air, a strangeness about the surroundings that he was so familiar with but now felt foreign. Turning to his left and looking down the hall stood two figures. Harden shook his head and though, "no way". He looked again and they were still there. Ralph Sampson and Hakeem Olajuwon, Houston's "Twin Towers" of years past. Seemingly peering into the deepest caverns of his soul, they spoke to him without prompting. "Come play with us Beardy. Come play with us…forever and ever and ever." Was this messed up? Yes, this was crazy pants. With that, Harden walked away with a quickness to the bathroom. 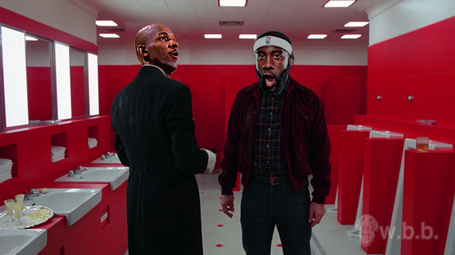 He opened the bathroom door and walked over to the sink to splash some cold water on his face. Maybe he had been out too late the night before. Feeling a little better, a voice startled him. It was Clyde Drexler, one of the best shooting guards in NBA history and Harden was at once star-struck and at ease. Drexler motioned to Harden to come closer. "Hello Mr. Harden, how are things in Houston? Is Lin getting the ball to you as much as you would like?" Confused, Harden tried to set things straight. "Clyde, you were the starting point guard in Houston. Not me.". Drexler, with an authoritative tone, "No Mr. Harden, you are the starting point guard for the Rockets. You've always been the starting point guard for the Rockets." At this point Harden was beginning to worry. This was just insane. Without saying goodbye, he left the men's room and made a beeline for the player's lounge. 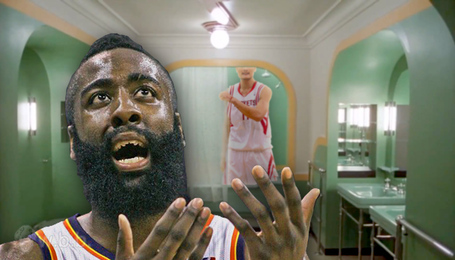 Upon entering the player's lounge Harden thought about calling his agent to see if he could get an appointment with a mental help specialist. The lounge was fairly empty, but he knew that most of the other guys were out of town and that Westbrook was the only other guy he knew was in the building aside from Drexler and the twins. That's if Drexler and the twins were even real. Out of the corner of his eye he spotted a Thunder Girl in one of the showers, but this didn't bother him for obvious reasons. He shouted out a hello and walked over. Mid stride he had that same odd feeling he had earlier. The stillness. Blinking his eyes, he look up and the Thunder Girl was no longer there. In her place was Yao Ming. It was unavoidable at this point. Things were very, very wrong. 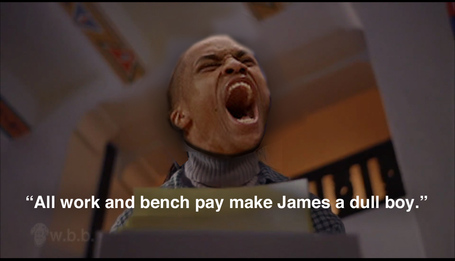 Westbrook heard the scream coming from the player's lounge and dropped what he was doing and ran in the direction of the disturbing noise. En route, he noticed something even more unsettling. Having come upon a typewriter that was clearly out of place, he looked at the paper in use. Over and over again was written, "All work and bench play make James a dull boy.". With this, Westbrook bellowed out a moaning that he had never thought would come to be. Harden was gone. 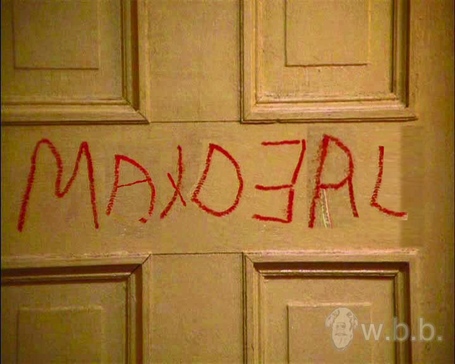 Dropping the paper, Westbrook sprinted towards the player's lounge and did so without knowing the impending horror that would await him. The door to the lounge was marked with red text. "MAXDEAL". Who would have done this? Why is this here? 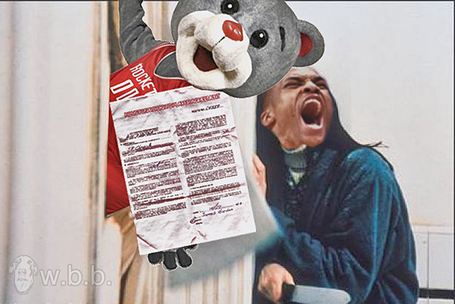 He ran from the defaced door, but not quickly enough. It opened and the Rockets mascot approached him with a menacing glare. Russell took refuge in a broom closet, but the crazed mascot tracked him down. Physically, Russell would be fine, but it devastated him on a spiritual level. The bear man ripped through the closet door and shoved a paper in his face. It was a Houston Rockets contract signed by James Harden. 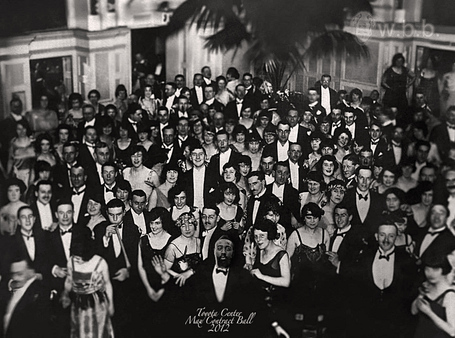 It was done. Harden is in Houston and we'll both miss him and wish him the best while looking on to a bright future for the Thunder without creepy twins. Happy Halloween!