In conjunction with NBA entertainment, a new movie is coming out in a week that lets us listen in as our favorite NBA players talk about what it takes to become a champion.

One of the great things about the new audio-visual technology that dominates the sports landscape is how it brings greater access to the players we love more than ever before. Enter: "Wired - A Season Inside the NBA."

We were reached out to by some of the representatives for this new documentary and by the early look of things, it will be well-worth your while to check it out. The film covers footage of the past three seasons, and since our OKC Thunder have been well represented during that time, we're sure for some great inside talk amongst the Thunder team.

As an added bonus we at WTLC will be receiving some copies of this film which we will hold and look for some opportunities to give them away via WTLC contest, so keep an eye out for that.

Here are the details:

What is it? Blu-ray/DVD Combo Pack, Produced by Bombo Sports & Entertainment.

When? Available online and in stores on October 30th, where Bombo and NBA Entertainment will launch "Wired: A Season Inside the NBA" giving fans an unprecedented behind-the-scenes look at an entire NBA season. The Blu-ray/DVD combo pack gives fans exclusive access to practices, locker rooms, road trips, planes and bus rides for every team in the NBA, including the Boston Celtics, Miami Heat, New York Knicks, and Los Angeles Lakers.

Who? Produced by Bombo Sports & Entertainment, "Wired" lets fans see and hear the league's most celebrated superstars - ranging from LeBron James, Kevin Durant, Derrick Rose, Dwight Howard, Blake Griffin, Dirk Nowinski, Kevin Garnett, and Kobe Bryant - as they battle the ups and downs from training camp to the last game of the NBA Finals. Shot over the past three seasons, Wired takes fans inside training camp as each team prepares for the season and goes along for the ride as players hop from one city to the next while keeping focused on the next opponent. The access sheds a unique light on the human element of injuries, holidays, team bonding and the push to become a champion.

Why? "We created ‘Wired' to give access to the fans who love the NBA and thirst for more than the game. With a season that goes from November through May, we captured what it truly means to play in the NBA and the hard work that players and coaches put in on a daily basis to compete at the highest level," said Paul Doyle, executive producer for Bombo. "This film includes extensive use of the wireless microphones, on players, on coaches and always behind the scenes"

How much? Wired: A Season Inside the NBA Blu-ray/DVD Combo Pack is available for only $24.99 on NBAStore.com and other online and DVD retailers.

How does it look? We thought you'd never ask. 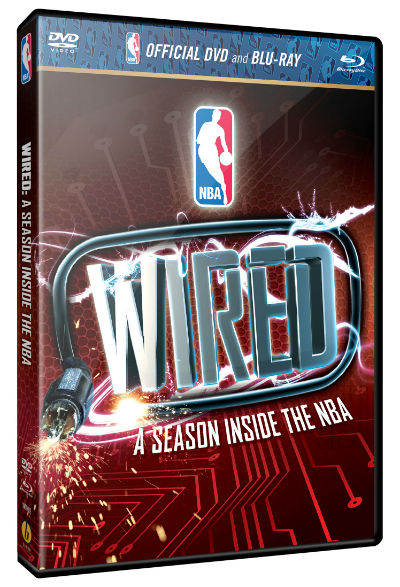