the Mavericks and Thunder renew their rivalry tonight as the two teams meet up in OKC's final preseason game of the season. We check in with Mavs Moneyball to find out how things are going up I-35. 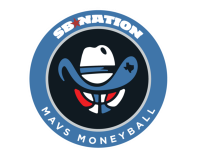 The Thunder and Mavericks are playing tonight in what is the Thunder's final preseason game of 2012. As we have numerous times in the past, we check in with Mavs Moneyball to exchange ideas and see how the Mavericks are shaping up. Kirk Henderson of MMB was kind enough to engage with us, so check out our questions for him as well as his thoughtful answers below.

1) After the Thunder eliminated the Mavs in the last playoffs, Dirk Nowitzki gave an honest assessment that Dallas simply did not have enough playmakers to compete. How do you think Dallas has addressed that concern heading into this season?

It depends what perspective you take. Considering Deron Williams was plan 1, 1A, and 1B for Dallas anything short of that is disappointing. But then the team opted to let Terry walk, Kidd signed with the Knicks after a handshake agreement with Cuban, and a load of mid-tier players were heading into free agency. As a fan with no control, it was a horrible feeling. Dirk was about to be stranded in the twilight of his career with no help other than Marion. So for the team to flip Ian Mahinmi (who I still expect to engage in a fashion contest with Ibaka one day) for Darren Collison and Dahtay Jones, sign O.J. Mayo and Kaman, and snag Elton Brand off of waivers? We should feel lucky. The team is watchable, and after 12 years of playoffs, watchable is about the least the Dallas fans will tolerate. But is the team any better? No. It might be much worse, actually. But it will be much different from last year. That I can promise you.

2) Dirk's knee surgery is unfortunate in its timing, but how do you think it is going to effect the season overall? What does your current group need to do to stay competitive while he rehabs?

My first reaction was "well, maybe it won't be so bad. It will let some of the guys figure out who they are in Carlisle's system without having Dirk as a crutch. It'll encourage growth!" Now, after some rocky preseason games I'm not so sure anymore. The 2011 title run that establishing a rhythm and flow in Carlise's offense takes a lot of time. I didn't even think that team would win a playoff series until it dismantled New Orleans in the regular season finale. Missing this much time with a vital cog is bad. Add in the Kaman is missing this last half of the preseason and I dont know what happens when the season starts. The current group needs to rebound better, focus on limiting turnovers, and make a dang basket. The last three preseason games the Mavs have shot 39.9% from the field. Keep an eye on Jae Crowder. He's been delightful.

3) Dallas will face stiff competition this season to vie for a playoff spot. What advantages does Dallas have over teams such as the Grizzlies, Clippers, and Jazz?

That's a great question. With the Grizzlies and Clippers, the honest answer is nothing. The match ups all tilt towards those teams, though not by a ton. With teams like the Jazz and the Wolves, Dallas has much better experience, particularly in the front court. The Jazz front court is so talented, but the Mavs seem to get the best of them. With the Timberwolves its a race to see who gets their star back first. The Wolves have some very interesting pieces but like Dallas, they face the question of how will they fit together?

4) How do you think the Mavs will match up against the Thunder heading into this season?

Depends on how Brooks uses the many weapons at his disposal. For some reason he sticks with Perkins when playing Dallas and he really doesn't bring anything to the table. Dirk has proven himself nearly unguardable when playing the Thunder, despite the fact that Collison and Ibaka guard Dirk as well as anyone has over the last decade (Collison and Marion have guarded Dirk the best all time, in my opinion). Trying to guard Westbrook is like trying to catch water, but at least Collison has some foot speed in comparison to Kidd. Marion does as good of a job as anyone on Mr. Durant. But the Thunder are simply younger, more talented, and deeper from top to bottom. Its a good thing Dallas won that 2011 series, because the Thunder are likely to win most games against Dallas for the foreseeable future.

Many thanks to Kirk, and here is hoping we have more opportunities in the future to engage.