OKC artist W. Bennett Berry takes us through an epic Day 5 of painting.

Share All sharing options for: How to paint Kevin Durant: Day 5, Epic

Today we bring you an extended version of the mind and art of W. Bennett Berry. As you'll see, Bennett reached the rare state of mind where the time-space continuum bended to his will. I kind of imagine that it was a bit like Mike McD from "Rounders," who would go on 36 hour poker runs at a time to keep the loan sharks off his back.

For installment #5, it was epic. I don't believe I've ever painted for that long, for that many consecutive hours, since grad school at OU. It was harrowing. Jack Bower would have been impressed. There is not enough hyperbole to cover it, it was an absurd idea and even more astoundingly stupid that I managed to go through with it. Knowing the deadline, and also knowing that I had tickets to OU-Texas on row zero on the 47 yard line (I rarely sacrifice work for anything, but ROW ZERO FIFTY(ish) YARD LINE ERMHAGERD!), I had a cunning if not stupid plan. I would wake up at 4:15am and wreck shop for the rest of the day. Dominate. I woke up with the mindset of Ed Reed. That lasted roughly up to 2:15pm. The painting went well enough, I spent the majority of the day working on the whole of Durant's left arm. The major hurdles were the way the light hit the bicep and the tendons and ligaments on the elbow joint. The light from the rafters bounces off the hardwood and creates a great lighting effect on the underside of the arm, but capturing that with the right differentiation from the harsh light from above sounds easy but can be tricky.

The painting playlist to start the day, one of two playlists considering the marathon that the day would be, was pretty chill. Though on the commute over (with no traffic on the NW Expressway or Classen, that part was badass) to the studio I will admit to blaring some Andrew WK "Party Hard" and B.I.G "Hypnotize" to wake up. You've got to love anything that appropriates the idea of underoos with absolutely no shame. 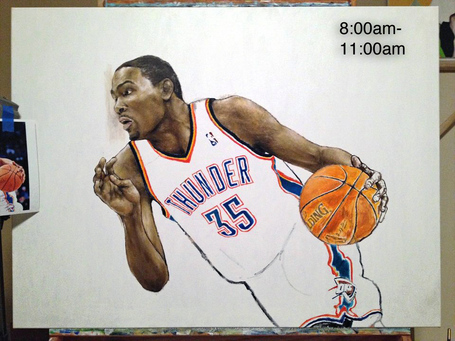 Things went smoothly if not well for the first few hours. I successfully woke up at 4:15am, though I shuffled around and didn't get out of the house until around 5:20ish. Having a magnificent case of ADHD, I was wide awake after 15 to 30 minutes so getting started in the studio wasn't a big deal. As mentioned, the arm was the task at hand and the bicep and deltoid were first up. I made my way through the delt without too much trouble, maybe an hour or so in it. The bicep proved to be a bigger challenge, with the reflected lighting from the hardwood proving to be a little more difficult than I had anticipated but perverse in the sense that I liked the unnecessary work that went into it. By 11am, the arm was finished up to the elbow and it was time to head back home to let Mattie the Wonderdog out to do whatever she needed to do in the back yard. Unrelated, but Monday (10/22) is her 12th birthday. All hail the Mattie and pray she have mercy on your soul (she's a benevolent deity). 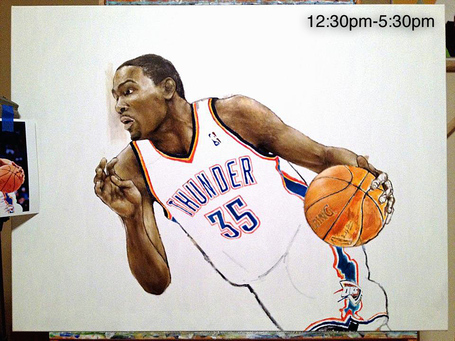 After stopping by Porch Art Supply to pick up some new brushes (Liquitex, of course) and paints I headed back to the studio for the afternoon stretch of the insanity paint-a-thon that was Tuesday.

Before I get into the pleasantly uneventful forearm painting, I do have to note one aspect of the day to day existence of my non-Thunder website/blog job. If you wear your day to day clothes to work as an artist, you will have your life mortgaged to J.Crew, Dillards, The Gap, or whoever in short order. Painting is bad for your clothes. 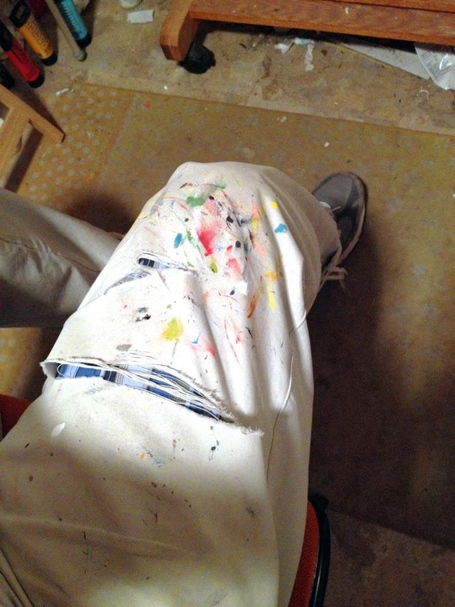 That being said, I have what I call my "painting pants". They are not fit to wear in public as is, so I have taken to wearing them with pajama pants doubling as boxers to fix certain issues that I won't dwell on. The only reason I mention this is because my friends get a huge kick out of this. It's a homeless preppy kind of look. I feel I wear it well. 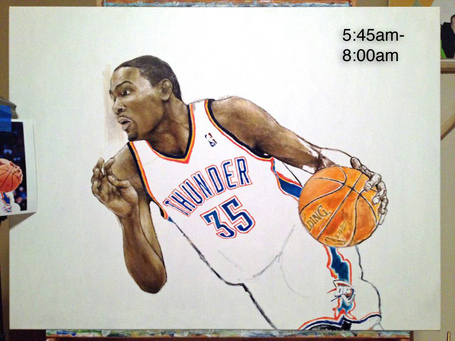 On to the afternoon. It was sort of a blur. I finished off the forearm and hand, and I remember the hand being much more of a task than I had anticipated. At this point in time I recall having the podcast playlist on (Grantland, all varieties of NPR, Slate podcasts, The Moth, and of course the OKC Thundercast) and thinking that I should probably take a break because my eyes were having trouble focusing. Imagine staring at a computer screen for hours on end. Then imagine trying to focus on one pixel for hours on end. That's the equivalent. Did I take the break? Of course not.

Not until halfway through the "Hollywood Prospectus" Grantland podcast when I decided that both the podcast and the basketball was stupid and my eyes hurt and what's that in the corner of my eye am I hallucinating? Good time to put up the brushes and I did so at roughly 5:30pm. I usually quit for the day anywhere from 6 to 7, so this felt like a bit of a weak move but I had been up since a ridiculous if not insulting hour. The good news was that I made it out alive.

That evening, my glorious nose bleed Thunder season tickets also arrived and the first thing my buddy said (split the tickets with him) when he dropped them off was, "dude...you don't look good." In an off sort of way, I took pride in it. To end the epic Day 5 I'll also attach a 1-2-3/beginning, middle, end of art history slides that I symbolically equate to the 3 parts of the day. The first is an Edward Hopper street scene: 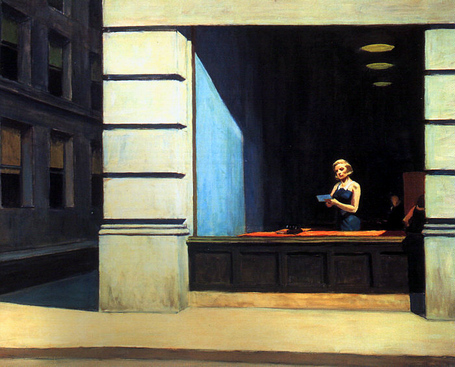 The second is a slightly freaky but still cool Francis Bacon: 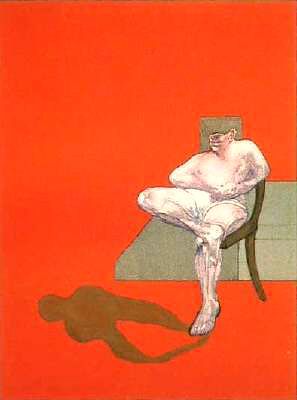 The third is a perfect rendition of my aptitude at 5:30pm that day by Jean-Michel Basquiat. 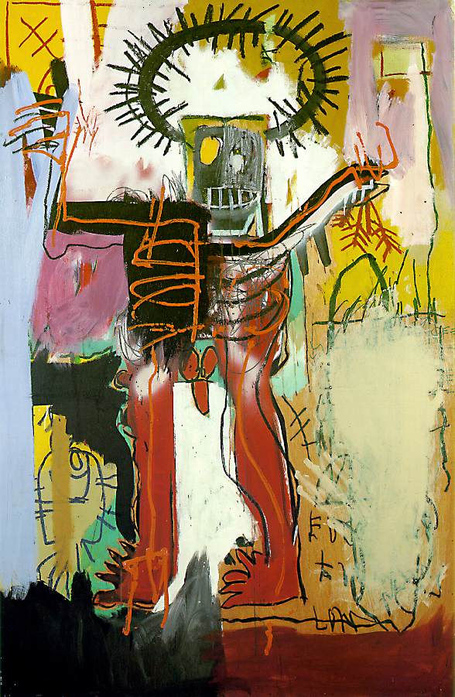 Finally, here was Bennett's playlist for the marathon painting session: 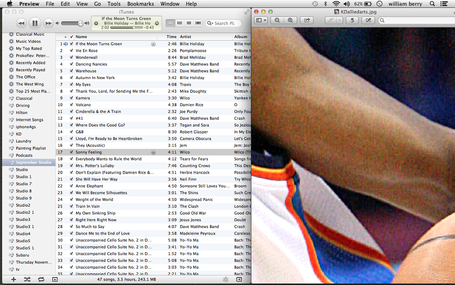