How to paint Kevin Durant: Day 4

OKC artist W. Bennett Berry gives us some more perspective on his Kevin Durant project in day 4, as well as gives us a brief bio as to how he got into the art business. Check it out.

Share All sharing options for: How to paint Kevin Durant: Day 4

OKC artist W. Bennett Berry is back with another installment of his work-in-progress. Kevin Durant, the Painting, has been coming along nicely, as we've seen Bennett successfully wrestle with how not to make KD look like Alonzo Mourning. As we peer deeper inside Bennett's psyche, we bring you Day 4.

First up, I actually asked Bennett to talk a bit how a Thunder-loving OKC native got into painting. Here is his response:

"I'd always been interested in art dating back to flipping through art books in my parents house as a 5 or 6 year old. Two books that I remember more than others were the Picasso and Leroy Neiman (blasphemy to credit if you ask some contemporary painters, but I grew up a die-hard college football fan and he had an Alabama-Tennessee painting that sold me on the art thing). I've appreciated both Nieman and Picasso's work since, but I've never been a huge fan of either. At least not in recent history, though that's not to say I'm knocking them. My favorites in recent history have been van Gogh, Pollock (Autumn Rhythm no 5 in specific), Basquiat, Alex Katz, Kehinde Wiley, Alfred Sisley, John Currin, Caravaggio, and I could keep going but I'll stop there. I had been involved in art in high school, president of the art club and things like that, but I almost exclusively drew rather than paint or sculpt.

"Fast forwarding to college, I went to Denison University planning on a double major of Poly Sci and Comm through the first half of my soph year. Denison is a liberal arts school, so I "had" to take a few courses in the arts. It quickly became apparent to everyone but myself that I was far more interested in studio art than I was in my current double major and it took the girlfriend at the time and George Bogdanovitch, the painting/drawing prof, a semester and a half to convince me to switch over to a studio art major. In the following couple of weeks, my parents had a cocktail party at their house and among the guests was a gallery owner. She had seen a couple of my painting 1 and painting 2 class pieces that my parents had up in the house and she had asked them who the artist was. Then she told my parents to ask me to give her a call. Lucky? Yes. Lucky. Right place and right time. I've been showing at the Howell Gallery since and this will be my 13th year with the gallery. The coolest part was getting to sell my homework."

Here exclusively for you is one of the first paintings Bennett did at age 11 or 12. In his words, "A definite Leroy Nieman wanna-be painting of a fictitious OU-FSU game." 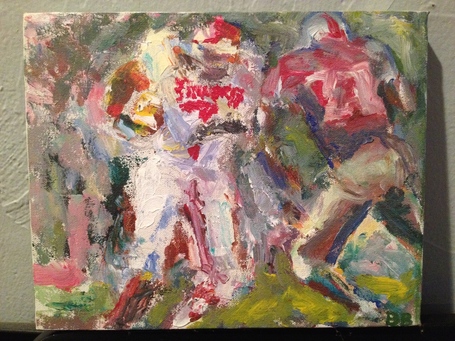 Back to our painting. Our first image today is what Bennett referred to in Day 2 as his "Leon Lett moment." 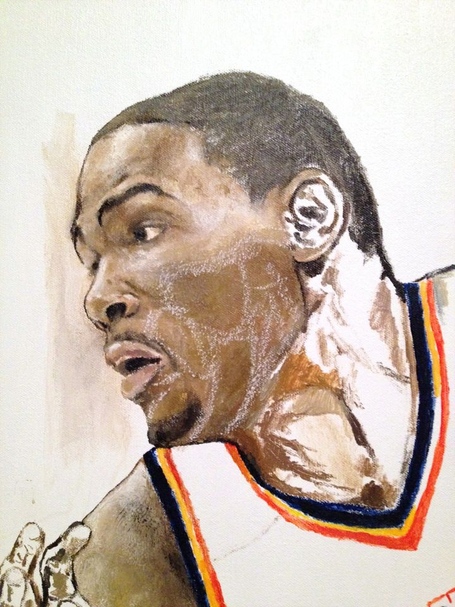 Bennett talks a bit how he goes back to repair the painting when he thinks some adjustment is needed:

"Here is a progress shot back from Day 2 that covers how I fixed things that I'll attach. I'll generally use Crayola white chalk to go back into things that need adjusting. Unlike paint, it can just wipe away without jeopardizing anything. The usual rule of thumb is to take a break at least once every three hours of straight painting in order to preserve a sense of mental perspective and objectivity. Otherwise you get too locked in on the specific portion that's being worked on and lose the big picture. You can think it looks great when you're actually burning the thing down. At the end of the day, that's what I was doing." 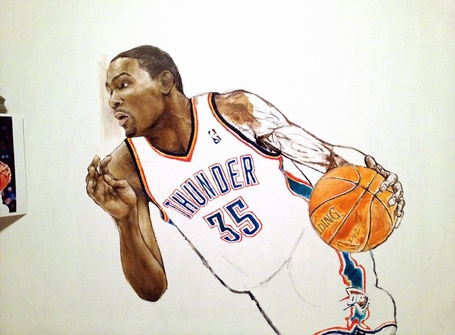 "On day 3, the two main things I was working on were getting started on the ball and the left arm. The left arm didn't present as the lighting challenges of the right arm, but the intricacies of the muscular structure were far more involved. With the ball, at this juncture I had put a flat wash of a mixed yellowish red-orange with hints of khaki and rust to tone down the branding on the ball and have a base color in general." 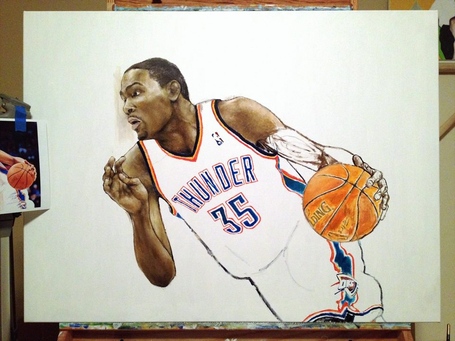 Lastly, we get a glimpse as to what Bennett was using as musical inspiration as he continued in his work:

"It's not always the case, but as you can see from the top played it's clear that Debbie Downer music is good to paint to." 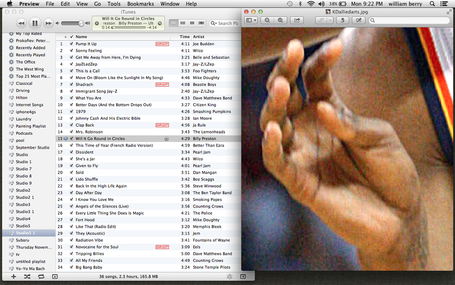