Russell Westbrook finally signed with Jordan Brand, a division of Nike, for a multiyear agreement.

Nike's subdivision, Jordan Brand, announced today that Russell Westbrook has signed with them for a multiyear endorsement agreement. Michael Jordan himself issued a statement:

"We are very excited to welcome Russell to the Jordan family. Russell’s style, both on and off the court, combined with his love and dedication to the game make him a perfect fit for the Jordan Brand. We love the drive and passion for basketball that Russell brings."

Westbrook fills the void that Dwyane Wade left when he parted ways with the Brand and signed on with the Chinese outfit, Li-Ning. In stepping into his new role as a shoe spokesman, he sidles up along side both Carmelo Anthony and Chris Paul as the most recognizable NBA stars on the advertising campaign.

According to Forbes Magazine, the Westbrook move is the right one for Nike:

Adding Westbrook to the Jordan Brand line is a smart move for both the player and the brand. Although there are more than a dozen basketball player endorsers, Westbrook joins Chris Paul and Carmelo Anthony as the top NBA endorsers of Jordan Brand. As if joining the ranks of Paul and Anthony aren’t enough, Westbrook can be rest assured that whatever Jordan Brand merchandise he’s repping will be very well marketed.

Westbrook has morphed himself into sort of an avante garde kind of public persona. He started to really separate himself with his fashion sense in last year's playoffs, and Westbrook has continued pursue his fashion interests in the off-season. There are a multitude of different ways in which Nike could take Westbrook, and given their success with other players, I can't wait to see it.

The best part yet - the announcement inspired Westbrook to return to the Twitter machine: 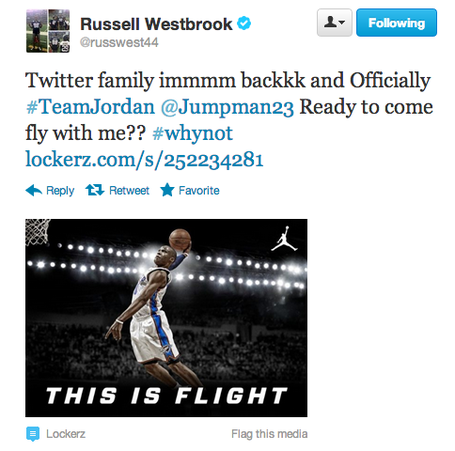