Forbes has released its yearly calculations of NBA franchise values by total valuation. The most valuable franchise is now the Los Angeles Lakers, which Forbes values at $900 million. The Lakers switched places with the Knicks, who took the top spot last year. The Bulls round out the top three.

According to the story, the combination of the new CBA and huge local television deals have pushed the average NBA franchise value up to $393 million, an increase of 6.5% year-over-year. Despite the cancellation of 240 games due to the lockout,

The deal is more favorable to owners compared to the prior agreement. It cuts the percentage of total league revenues that players receive from 57% to a range of 49% to 51%, which is more in line with what NFL and MLB players get. It will save owners $250 million annually at the start of the agreement.

You can find the franchise value ranking from last year at THIS LINK.

Here is a snapshot of all the teams' valuations, ranked from most valuable to the least: 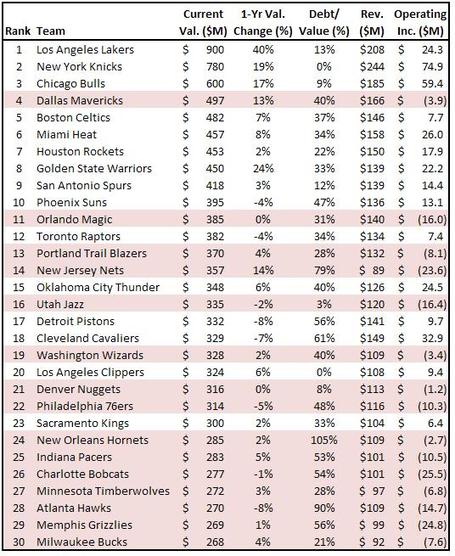 I have highlighted the teams that have lost money this past season.

A few additional comments after the jump: