The Imbalance of the Thunder's Pick and Roll Offense

Share All sharing options for: The Imbalance of the Thunder's Pick and Roll Offense 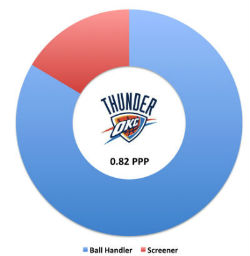 The pick and roll offense is a staple of all NBA teams. The Thunder like to employ this offense ordinarily by putting the ball in the hands of either Russell Westbrook or James Harden (and sometimes Kevin Durant). All of these players possess the skill and athleticism to put a defense on its heels and exploit either a seam in the defense or a defensive switch. What though about the screener? How often do guys like Serge Ibaka, Kendrick Perkins, and Nick Collison get a chance to finish the play?

Ian Levy at Hickory High has the answer:

You can enjoy his pretty picture diagrams at the top, or you can delve into the data in the table below. In order to make sense of it:

If you were to go to the data table and sort by the first column, "PNR Ball Handler %," you will see that lo and behold OKC is right at the top with a percentage of 83.54%. This percentage means that, more than eight times out of 10, the man who is starting off with the ball (Westbrook, Harden, or Durant) is also the man who finishes the play. Conversely, guys like Perkins, Ibaka, and Collison are only going to get their hands on the ball to finish less than 20% of the time. If we assume the Thunder get on average around 80 shots per game and they run the PnR 22% of the time, you can see that they are taking collectively about 17 shots per game out of this set. Dividing this number up between ball handler and screener, the shots are divided up as 14 for the ball handler to three for the screener.
Anecdotally this makes sense, since the Thunder are one of the lowest assist teams in the league, averaging only 18.2 per game thus far. OKC does not depend on passing in order to create shots.
Furthermore, you would expect the ball handler in most cases to be the man that finishes, since Westbrook, Durant, and Harden are all highly skilled offensive players who can either step back for the jumper or attack the rim. These three players comprise 64% of the team's total offense, so you would expect that they're going to be the guys finishing the plays the most.
Three general observations:
1. On a psychological level, if you're the ball handler and you get the screen, your willingness to give it up to the screen-setting roller is a function of your confidence in his ability to finish the play. For OKC, we rarely see PnR plays involving Ibaka or Perkins where either of those two finish the play, and this could be because the ball handlers do not yet have the confidence that those two guys can finish well. By contrast, when Harden & Collison are in the game, you're more likely to see Harden hit Nick on the roll. They like to set it up on the right side of the court (probably because Harden is left-handed) and you will see them work it multiple times per game. Because Harden finishes at the rim so well driving left, there will usually be at least one play where he sets up Collison perfectly. Key though is the fact that Collison knows how and when to roll, can receive the pass, and can finish with either hand. Harden clearly trusts that Collison can finish in the play set.
2. I presume that teams who scout the Thunder know about this ball handler usage statistic, yes? We know that at least some teams do, in particular the Trail Blazers and Grizzlies, because they seem to be the relatively few who have been intentional about disrupting the high screens that the Thunder employ. Logically, if you know a team is going to run a PnR and over 80% of the time the shot is going to come from the ball handler who is using the screen, you would over-hedge on the play 100% of the time, correct?
3.You can divide screen plays into two general categories. Colloquially, we can call them, "Set me up," or, "I'll set you up." The former (i.e. the Thunder) means the ball handler is looking for a screen in order to free himself up for the drive or shot. The latter means that the ball handler is looking for a player that HE wants to set up, so the ball handler demands a screen from said player in order to help create space for him. For example, John Stockton ran the pick and roll with Karl Malone approximately 10 million times (estimates may vary), and Stockton's object was almost always to get the ball to Malone either cutting to the rim or in open space for the jump shot.
Last month we saw a post by Beckley Mason that examined this very premise. By making Durant the screener, the Thunder can 1) effectively create an open lane for the ball handler (as the defense goes under the screen); 2) open space when the defense chases the ball and leaves Durant alone; or 3) create a mismatch where Durant finds himself on someone smaller or slower. Using Durant in this role would reap remarkable dividends, because it would mean that OKC would have the option of shifting PnR philosophies from "Set me up" to "I'll set you up." The finishing percentages would begin to even out. Even better, there is no reason why the team couldn't reverse roles and have Westbrook be the screener when Durant has the ball. Who wouldn't enjoy watching Westbrook bear down to set a big screen on an unsuspecting flimsy small forward and then be rewarded with open court space and a terrified and now wobbly 6'9" player trying to get low enough to keep Westbrook in front of him?