You can find all of the previous KDIV Colorways here and here.

The NBA season is in full swing, and there's no shortage of shoes out there. Kevin Durant and his shoe, the KDIV, shocked the sneaker world with colorways such as the Weatherman, Nerf, and Year of the Dragon. But as the shoe goes into more full-scale production, more toned down and area specific designs are starting to pop up. Some are grand slams, some are terrible, and some are just okay. Let's get down to it and sample these new colorways. 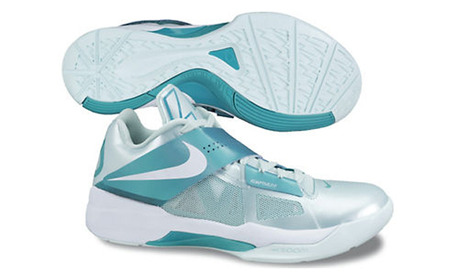 Analysis: This shoe goes with the metallic paint of the Metallic Copper and Cool Grey colorways, but it does so more subtly, integrating different shades of light blue rather than blasting one color in your face. It's the type of shoe that does just enough to stand out without being too outrageous, as the lighter shades of blue are close enough to the metallic color on regular gym shoes these days to blend in. 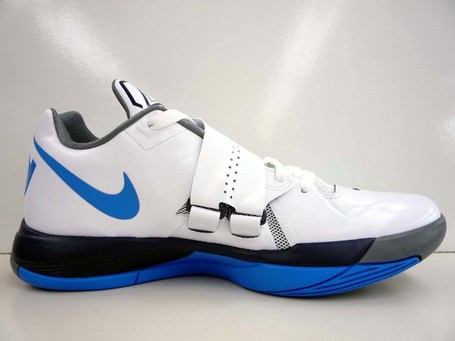 Analysis: Kevin Durant has wore these colorways at media day, and they're definitely more toned down when compared to the more zany varieties this year, like Weatherman, Year of the Dragon, and Nerf. It's something closer to what I see normal people wearing, giving a subtle combination of black and blue with white, which seems to be the standard color for most gym shoes.

Opinion: This one's for all of the boring people out there who want to blend in with some really white shoes. Like Seinfeld or something. Sure, there's a little bit of blue here to spice things up, but this is the type of shoe that's meant to easily blend into every day outfits.

Rating: B. Does what it's supposed to do. 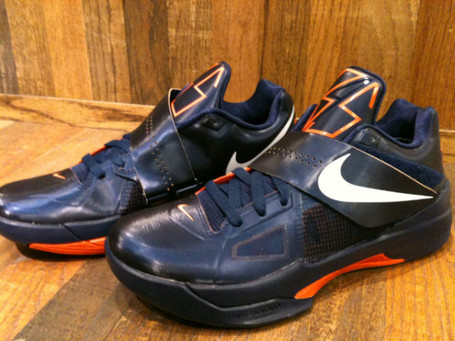 Analysis: This shoe is another attempt at making the KDIV line more subtle and wearable by the average people. This shoe brings together a dark navy base while throwing in subtle hints of orange.

Opinion: Not a huge fan of this shoe. I think dark blue and orange are all good, but this blue strays a bit too far towards purple, while trying to hide the fact that it's also displaying orange. The result is a shoe that just doesn't look complete. 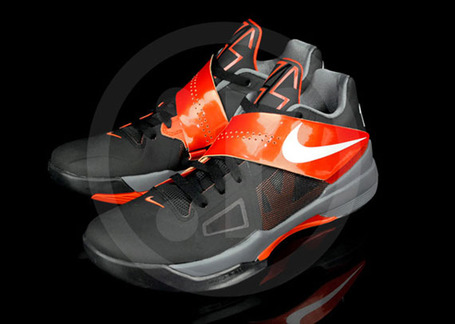 (Image via Nicekicks.com and rmkstore.com)

Opinion: It's a nice tribute to the in-state college, with colors in their appropriate places. I think the tongue could have done without the orange, though. Still, this shoe caters to a very specific market, and there's a reason it was released shortly after the Fiesta Bowl.

Grade: B-. Done solidly, but no real originality. 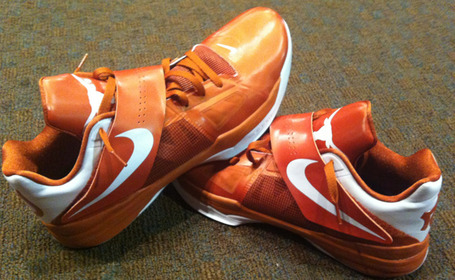 Analysis: It's Texas, and it worn by the UofT basketball team. Mostly burnt orange, but some white on the back, sole, and strap.

Opinion: It represents Texas well, especially by replacing the KD logo on the tongue with a Longhorn logo. Texas usually doesn't bust out the white in their color scheme much, so the shoes follow suit well.

Grade: F. College rivalries aside, burnt orange is a terrible color. I'd rather wear pink. 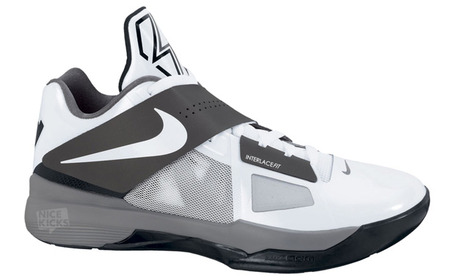 Analysis: A more apt description would be white, black, and grey. This shoe does a good job melding them all together, with the white on the base and swoosh, the black on the sole, strap, and accessories, and the grey limiting itself to the inside of the shoe, part of the sole, and the smaller swoosh.

Opinion: If you wanted white, black, and grey, this is a nice combo. But if you're going to tease us with a black and white, why not rid yourself of the grey and be more bold with it? Almost every shoe these days has grey in it, and I think eliminating the color with this particular colorway would have been keeping moreso with the KDIV hierarchy.

Grade: B. Despite the review I gave, it's still a solidly put together colorway.

For some reason, I skipped over this one in my earlier post. So here it is now. 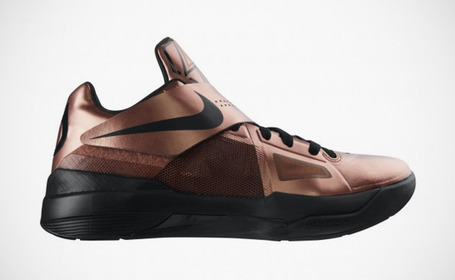 Analysis: This shoe looks similar to that of the Cool Grey Colorways, keeping with the metallic coloring and simplistic tongue design. However, it features black much more prominently than the other shoe features yellow.

Opinion: Any time I see copper, I'm reminded of pennies, old leaden pipes, and my Dad's old car. None of those things strike me as particularly stylish, but if they had to put copper in the shoe, this is a nice way to go about it. Don't make it too extreme, and blend it in with black.

Grade: C+. It does well with a bad color scheme.

What do you think of the new batch of KD IV Colorways? Vote in the poll, post a comment!