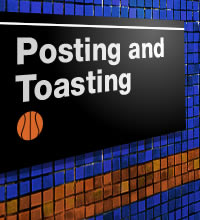 Tomorrow night the Thunder are going to be visited by their longtime nemesis, the erstwhile Nugget Carmelo Anthony (maybe). This time out though, he's bringing Amare Stoudemire and a revamped NY Knicks team with him.

The Thunder only get to play the Knicks once this year, and thankfully it is in OKC. Since the Knicks reside in the east and we may not have a full grasp on how they're doing, we called upon Seth Rosenthal at the outstanding SB Nation Knicks site, Posting and Toasting to enlighten us. Be sure to head on over there to get the full Knicks flavor. You can also see the questions that Seth had for me, and how I answered, by going here.

My questions are in bold below, followed by Seth's responses.

1. It is rare to see a Mike D'antoni offense which features two of the best scorers in the NBA averaging only 95 points a game; what do you think is holding the Knicks offense back, and will a healthy Baron Davis help solve the issues?

P&T: One can't assume that Baron Davis will cure all the Knicks' ills, but you're getting to the root of the problem. New York lacks a clear-cut floor general, and with a lot of scorers to be fed, the ball movement can get sluggish and disorganized. Things seem to be improving somewhat in that realm-- Carmelo Anthony has stretches where he passes brilliantly and Iman Shumpert has been electric so far as the starting point guard-- but the team's offensive chemistry remains spotty at best. Time to marinate together should help, as (hopefully) should the addition of Davis to the rotation.

2. We have now watched Carmelo Anthony play in a Knicks jersey for about the equivalent of half a season. How is his integration with Amare Stoudemire coming along, and where can we expect to see it go over the course of this season?

P&T: You know, even when they're both thriving, they don't quite seem integrated. Melo's developing a really nice (though, again, rather streaky) two-man game with Tyson Chandler, while Amar'e gets most of his scores in isolation and not off the pick-and-roll, as has been the custom throughout his career. You see glimmers of cohesion now and then, but they're still figuring out how to exploit double teams and use one another to get easy baskets. It's coming along slowly.

3. The Knicks' defense is surprisingly effective this year. How has the arrival of Tyson Chandler brought about such a change?

P&T: Well, initially, Chandler was left trying to defend everybody while the Knicks' switch- and trap-happy defense crumbled to pieces. More recently, they're still prone to switching, but guys are doing a much better job of rotating and allowing Chandler to stick around the basket and deter inside looks. If anything, I'd attribute the recent uptick in defensive efficiency to Iman Shumpert's return to the court. He's a big, strong defender who's done a much better job than Toney Douglas has at containing opposing guards off the dribble, and, at 6'5", he's not totally boned if caught in a mismatch.

4. What do you hope to see and learn when the Knicks take on the Thunder in their only meeting this season?

P&T: Well, the Knicks haven't had the highest quality of opponents (nor the highest quality of wins), so it'll just be interesting to see how they perform against a team that knows what it's doing. I think I'm most looking forward to the Shump vs. Russell Westbrook match-up. Knicks fans are pretty excited about the rook, and Westbrook will be one of the most difficult match-ups he's faced (not to mention the embodiment of how Shump might look if he fulfills all of his potential.)

Many thanks to Seth for his time and answers. Be sure to check out Posting and Toasting as the game approaches, and we'll look forward to seeing you all either at our game thread or at P&T's tomorrow night.