Kevin Durant Finally Gets a Tattoo We Can See....Kinda

Share All sharing options for: Kevin Durant Finally Gets a Tattoo We Can See....Kinda 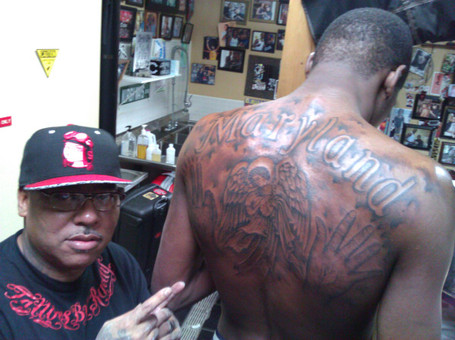 Yes, it's true. After years of hiding his tattoos under his jersey, Durant now has a tattoo that will be easily visible....if you're looking closely at his shoulders.

Again, Durant has opted to go for a tattoo that is not really offensive in any way. It is religious, represents his home town, and has hands that indicate his jersey number of 35. I doubt anyone will be up in arms. But, should his tattoo streak continue, it will be interesting to see whether Oklahoma, which didn't allow tattooing in-state until 2006, will accept him as much as they used to.

On the style-front, I've seen worse. It's way better than Monta Ellis' almost horrific family tree tattoo, or the wings Chris Andersen has on his arms. I'm not a huge fan of tattoos stylistically, but at least this isn't something that makes me want to look away, and it's somewhat creative.

If you're interested in his other tattoos, check out my post from a few months ago explaining what's what.