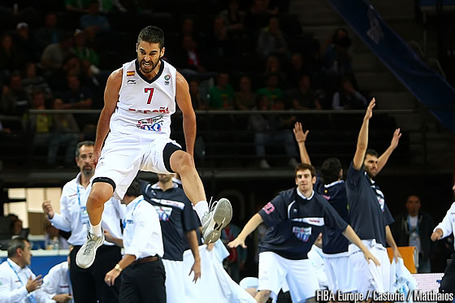 The Game of His Life!

Eurobasket 2011 continued today with some excellent Semi-Finals action, featuring a high level of play and many NBA stars. It also featured a classification game between Serbia and Greece used to determine who has a chance of getting into the Olympics.
Macedonia and Spain Box Score
But first, let's start with today's best matchup: Macedonia versus Spain. It was an intense game featuring some back and forth scoring not typical of European basketball. All of the perimeter oriented European teams have been eliminated, paving the way for individual talent to shine. And the two clear standouts in this game were Juan Carlos Navarro and Bo McCalebb. Don't get me wrong, their teams played wonderfully, but both of these point guards were playing out of their shoes. Navarro hit threes like they were free throws, while McCalebb drove into the lane and scored against Spain's best many times.
With these guys playing their best, it was apparent that the deciding factor in this game would be the role players. Both Gasols and Pero Antic did work in the paint, while Vlado Ilievski did a good job of emulating McCalebb, and kept the team efficient while Bo was on the pine. But Macedonia simply didn't have any counter for the great Serge Ibaka. Okay, maybe I'm sipping on a bit too much Thunderade, but 11 points in 17 minutes? For being a fourth or fifth offensive option, that's legit. Nobody got as high as Ibaka, as he stunned the game with three dunks, including a completed And 1. Sure, his jumper was nowhere to be found, and most of his points were second-chance, but he looked as good as ever and showed excellent knowledge of the game. Macedonia didn't have a force like him off of the bench, and I'm chalking up his performance as a big reason why Spain won.
The game was pretty close throughout, and both Spain's and Macedonia's fans showed up to cheer well. But Macedonia faded in the fourth as Spain showed more offensive firepower. With the win, Spain moves into the gold medal game, and Macedonia drops to the Bronze medal game. Despite the loss, Macedonia exceeded all expectations with their performance, and a Bronze medal would be an amazing first for the country, should they beat Russia.
Below: Russia and France, Serbia and Greece!
Russia and France Box Score
Russia and France also played an exciting game. They are similar teams in that both focus their offensive attacks on the inside. Both are also good at stealing the ball, since Russia is long and lanky, while France is fast and athletic. But they do differ a bit. France likes to drive the lane more often, and only really shoots if they're wide open. Russia, on the other hand, has no problem taking a contested shot if necessary, and they like to use their big men more often.
But two key statistics helped France win this game. France didn't take any tough threes, and their dedication to getting a good shot and superior ball movement (thanks to Tony Parker) helped them score more often than Russia. Additionally, as a team, France is much superior at rebounding, because they don't spend so much time outside. This gave France some key opportunities, especially down the stretch, where an 8-0 run pretty much sealed the game. Nicholas Batum also came out of his shell a bit, driving down the lane for some key points and not only reserving his expertise for wide open shots and dunks.
With the win, France gets to its' first ever Eurobasket gold medal game. With the loss, Russia doesn't repeat the success of 2007 and drops to the Bronze medal game.
Serbia and Greece Box Score
Lastly, Serbia was destroyed early in the afternoon by a hungry Greece. Technically, they only lost by 10 points, but Greece had a huge early run that essentially ended this game by half-time. Serbia's loss puts them out of contention for the 2012 Olympics, and likely ends the era of the current team. Greece secures a spot in the qualifying tournament, and moves into the 5th place game tomorrow.
And with this post, I conclude my "I was really there" Eurobasket 2011 Coverage. I'll be travelling tomorrow, but hopefully I'll have a post recapping all of the final action on Sunday. I also might have an All-Tournament Team post in the works, as well as an account of what it was like here in Lithuania.
Who will win the final? France or Spain? Vote in the Poll, Post a Comment!