Share All sharing options for: France Clinches Trip to the Semi-Finals Over Young Greece, Russia Cruises Over Serbia, and Lithuania Keeps Olympic Dream Alive Against Slovenia 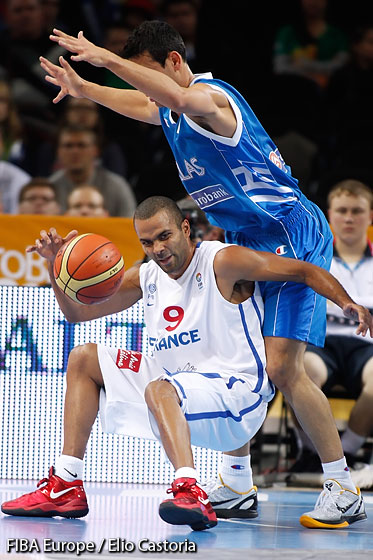 I'm not breaking your fall!

The Quarter-Finals action continues here in Kaunas, with two games being played today. Additionally, the classification round for 5th through 8th place has begun, with the two losers of yesterday playing in the first game. In Lithuania's case, there was less than 14 hours between the conclusion of their Quarter-Final game and the start of their classification round game.

Nevertheless, they persevered. Their game against Slovenia was about as intense as you can get. During the first half, Lithuania established a 11 point lead through a lot of hustle, fast break play, and attacking the basket. But they fell considerably in the second half, succumbing to energy problems. Slovenia stormed back into the game, getting a lot of help from Zoran Dragic and increased defensive pressure. By the fourth, they were killing Lithuania on the boards, and they had amassed a 72-68 lead.

But Lithuania wouldn't go down without a fight. They dug in defensively and started attacking the basket, something which they've rarely done all tournament. Slovenia did their best to keep up, but their offense stagnated, like it has several times before in this tournament, because Slovenia is slow and can't shoot that well. The result was a close Lithuanian win, which guarantees Lithuania at least a 6th place finish and, as a result, a spot in the Olympic qualifying tournament. Slovenia drops to the 7th place game, which is pretty much irrelevant.

Later in the day, France went up against young Greece, who are reforming their national team and don't have a player over 30. Greece actually led or tied the game until the fourth quarter, with both teams exchanging mini-runs. France relied a lot on Nando De Colo, Nicholas Batum, and Tony Parker, because Greece did a good job of keeping the lane closed. But Greece didn't really have a traditional leader to give the ball to in times of offensive struggle, so they would sometimes find themselves in an offensive desert.

Greece got to within two points in the fourth, but a four point spurt and block by Nicholas Batum gave France all the momentum they needed to pull away. It was certainly a valiant effort for the young Greeks, but they have some growing to do before they can be considered a serious contender in Europe again.

Russia vs. Serbia was a very defensively-minded game, but not in the traditional sense. Both teams are very long and lanky, resulting in a lot of steals on both sides. Whomever had success attacking the basket would usually go on a run, but Russia was more defensively sound, so they led for most of the first half.

Serbia came out of the gates storming, and started to double-team Russian players on defense, making it harder for the inside-focused team to find ways in which to score. They could never get over the hump though, as their shooting would get cold or Russia would find ways to stop them defensively, so they were down by 6 heading into the fourth.

Russia kept threatening to pull away in the fourth, but just when they could get complacent in their lead, Serbia would apply pressure outside and hit a deep three or desperately drive inside to keep the game going. But Russia would never let Serbia get over the hump. Serbia just turned over the ball too much and didn't have any offensive options. When Kirilenko got to the free throw line and put Russia up by 7 with only 51 seconds to go, it was all but over.

Nenad Krstic had a decent game, scoring a few points down low. But compared to his other games, his role offensively was a bit lackluster, and he allowed a lot of points. His mid-range jumper seems to have been missing in this tournament, and he's taken a bit of a downgraded role for his team in this Eurobasket, becoming less of a scoring option and subbed out more often for Kosta Perovic. I wouldn't say he's down for the count just yet, but I wouldn't be surprised to see him depart the national team after this Eurobasket or next year's Olympics.

Tomorrow, the Semi-Finals begin as Spain and Macedonia will be set up to clash. Also, today's losers, Serbia and Greece, will be fighting for a chance to get into the Olympics in the classification round.

What did you think of tonight's games? Who is going to win in Saturday's Semi-Final? Vote in the poll, post a comment!