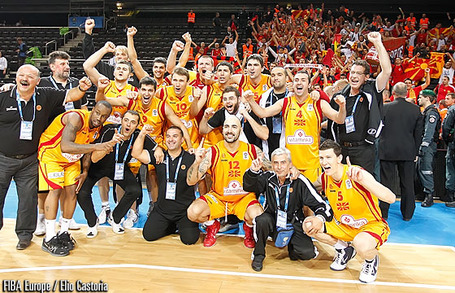 The first game, featuring Spain and Slovenia, turned into a total joke during the second half. The first half featured a scrappy Slovenian team limiting Spain's opportunities inside and taking responsible shots of their own. But Spain easily pulled away in the second half as Slovenia's offense inevitably stagnated and Spain applied pressure in the passing lanes.

Ibaka didn't fare so well though. He was present in the first half, but he wasn't a part of any offensive schemes. He blocked a couple of shots, but he was taken out midway through the second quarter and not put back in until Spain was well ahead in the fourth. He had an impressive dunk, block, and jump shots in garbage time. Hopefully he'll take a larger role as Spain moves through their final two games.

The real game of the night featured the Former Yugoslav Republic of Macedonia and Lithuania, the host nation. Tensions were high among the fans (more on that here), and with Lithuania hosting the Eurobasket for the first time since 1939, expectations were too. The crowd was as loud and joyous as you'll ever find in any NBA game, with Thunderstix all around the arena, several flags waving, lots of horns blaring, and big drums roaring.

Bo McCalebb continued to be the absolute hero for Macedonia, scoring in key situations and initiating serious ball movement. Lithuania refused to double-team him, so in certain situations he would just blow past Jasikevicus and right into the post for an And 1, or throw it over to a semi-open team mate. Stojanovski and Illievski both did a decent job of scoring as well, especially when they were set up in the right way.

Lithuania continued to pound it inside, with Robertas Javtokas and Simis Jasaitis being the leading scorers. However, Jasaitis shot an unusually low percentage, and Lithuania shot terribly from outside. They didn't get open looks as much as they usually do, and they weren't aggressive enough in driving to the basket. It seems like I'm listing a lot of flaws for a team that only lost by one point, but Macedonia is, in truth, a very beatable team, and Lithuania didn't do a whole lot to combat them.

The one thing that stood out to me the most, though, was hustle. Macedonia was constantly running up and down the floor, hardly ever allowing fast break points. I saw them dive for several balls, and during one possession, the ball was saved from going over the half-court line twice and going out of bounds. The possession also had two missed shots that were rebounded, and it eventually resulted in a tip in. Those are the types of plays that you can't plan for and just have to chalk up to hustle on one team's part.

I could give a breakdown of how the game ended, but I'll just leave it to good 'ol YouTube:

After the game ended, the Macedonian players stormed the floor, and Bo McCalebb was the first to thank their fans. Lithuanians were devastated, and it felt like someone had just let the air out of a thousand balloons. The fans still stayed to cheer on their team one more time, but the faces of the fans were so sunken and the voices were so monotone that it sounded more like a funeral procession than a congratulations for their team. Macedonia definitely deserved the win, but it's still a disappointment to see Lithuania go out the way they did, without a medal or a chance to go giant-killing.

What did you think of last night's games? Who is going to win in Friday's Semi-Final? Vote in the poll, post a comment!