Share All sharing options for: Kevin Durant Holds Workouts for Oklahoma City Thunder Players at the University of Texas

Normally, Twitter doesn't tell you a whole lot. You might find out about what NFL game Kevin Durant is watching, what Hollywood set Nick Collison is visiting, or what party Nate Robinson is visiting. But recently, Twitter actually told me a bit of interesting information: several Thunder players are getting together to work out in Austin, Texas.

The most recent tweet came from Nazr Mohammed, who said this:

Below: Perk's Absence, Their Accommodations, Special Guests, and Appreciation!

The most puzzling absence is Perk, who is from Texas and shouldn't have much problem getting to the workouts. In fact, his absence was lightly discussed by Eric Maynor and Russell Westbrook: 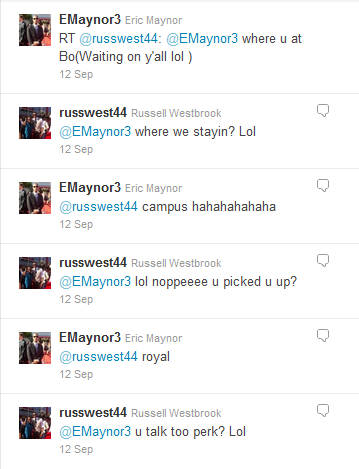 It's kind of funny that they're using a publicly viewable social media tool as a messaging platform. But it does shed light on the fact that Perk is not there (though it doesn't explain why) and it does state they're staying at the University of Texas.

Oh, but guess who else showed up?

Basically, this is the stuff of LEGENDS. Let me say it again. The stuff of LEGENDS. This is something that will be on the VHS tape they make about the Thunder dynasty ten years down the line. Ten players from one of last year's top squads are getting together, despite the lockout, and working out. And they're not staying in plush accommodations, either. They're staying in dorm rooms. They're willingly holding a college-style training camp.

It's almost unbelievable, especially in today's NBA, where an entire roster can change in a matter of months. I know there's lots of Thunder propaganda written these days, but even a blind man can see that what we have here is special. This team is truly a team, not just a overpaid collection of tall, athletic guys. We should definitely enjoy it while we can.