Goodman-Drew League II: Kobe Bryant In Talks to Join In the Action

Share All sharing options for: Goodman-Drew League II: Kobe Bryant In Talks to Join In the Action

Saturday night's game featuring the Goodman and Drew Leagues was a success, despite the bumps along the way, and the two leagues are in talks to do a second game in Los Angeles next month. LA is of course the home of one Kobe Bean Bryant, and talks have intensified to see if the leagues can bring Kobe Bryant into the fold.

Kobe suiting up with the Drew League squad would obviously bring a great deal of attention to a second game, and one would hope it would increase the likelihood of improving the game's production value as well. Game one's sub-par broadcast feed in particular hurt the match-up's exposure. I would think that even if every TV network in LA is terrified of ticking off the NBA's affiliates and won't come within 100 feet of broadcasting the game, the fact is that the game would be in LA. LA is the home to 10,000 wannabe film auteurs, armed with HD video cameras and Dreams of Hoops. I would think that some young enterprising film maker could at least figure out a way to get this game on public access TV.

(As an aside, it cracks me up when the Drew League Commish says that he thinks Kobe wants to play, "because he's hungry like that." I think it has more to do with the fact that Kobe is a basketball savant who seems to do things because he thinks those are the types of things he is supposed to do, kind of like a basketball version of Dexter, but without all the soulless serial killing)

My serious point is thus - there are a bunch of other hoopster kids hanging out in LA this summer, undoubtedly with some free time on their hands. 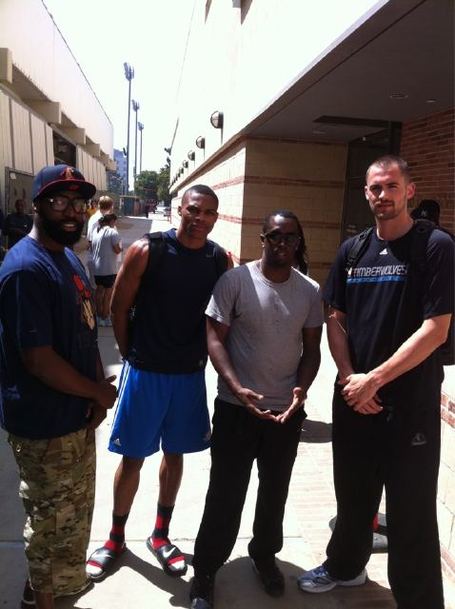 Kevin Love, Russell Westbrook, and Baron Davis are all taking classes at UCLA this summer, and media mogul P Diddy is hanging out with them.  Is there not some opportunity there with these guys?

Westbrook, Love, and Baron are probably looking for some pickup games after class (at least if you can pull Love away from his beach volleyball circuit. Easier said than done). Diddy can be the money man. He probably has enough dough to start his own underground TV station now anyway. Possibilities abound.

Ultimately though, is there not some way that Kevin Durant and James Harden could coax their teammate to step onto the court for Goodman-Drew II? The honey badger is built for games like that, and he can bring the house down when he gets going. We would also finally get a chance to see what it looks like in practice when Durant and Westbrook go at each other.