Share All sharing options for: Understanding Basketball in Europe

The article below isn't exciting or glamorous, and I doubt it will set records for pageviews. However, it is a straightforward guide to the Euroleague. It gives you everything you need to know about the European system in as short of a space as possible, something which can only be achieved by reading hours of Wikipedia entries on your own. I hope you find it informative and helpful as we head towards the inevitable locked out season of 2011-2012.

Since several players are leaving the United States to go play in Europe, I thought it might be a good idea to get familiar with basketball in Europe. The NBA is a league of teams from almost entirely one nation, and the teams do not compete internationally. The NBA acts as the king of it's domain, declaring the winners of the league "World Champions". It does not enter in serious international competition, unless you count a few pre-season exhibition matches.

Basketball in Europe, however, is quite different. All of the countries have their own leagues, like the NBA, but instead of just playing within their own nation, the best domestic teams play against the best of the other countries in regional and continental competition. First, we'll take a look at the domestic leagues.

The differences are much easier to see. Most striking is that the two worst teams in the league are relegated to a lower tier of play at the end of the season. That's right, there is absolutely no incentive to lose, for if you do it too much, you won't be rewarded with LeBron James. Instead, you'll be shown the door and replaced. Additionally, there are no conferences or divisions. All of the teams are placed into a pool, and ranked strictly on record.

Below: More Info on Domestic Leagues, Regional Leagues, the Euroleague, flow charts, and what it all means for players going international!

The reason leagues like Greece are so stacked towards a couple of teams is because a smaller nation like Greece can't afford to keep a competitive domestic league while also being competitive internationally. The national leagues generally shake out to be lower priority, below regional leagues and continental leagues, so smaller nations like to consolidate their resources into one team.

However,  the domestic league is still important for non A-licensed teams (explained later), for if they don't place high enough, they won't get into the highest level of regional or continental competition.

The flowchart above explains the Euroleague qualifying system in laments terms, but the text below should provide more in depth answers.

The Euroleague uses the rankings of last year's domestic leagues to determine who gets into the annual tournament, but there are 13 teams that get into the league regardless of rank. These teams have something called an "A License", which is determined based on performance, TV revenue, and home attendance. So, if a club like Lottomatica Roma is having a down year and doesn't place in the top three of Italy's domestic league, they still get into the Euroleague by virtue of their fan support. Of course, A licenses can be suspended. A good example is Virtus Roma, who had their A license suspended last year because they finished in the lower half of their domestic league.

Other teams, who placed slightly lower in a top league or got first place in a less prestigious domestic league will get placed in the Euroleague Qualifying Round, which is two eight seeded tournaments, the winners of both whom are awarded admission into the regular Euroleague season. Some leagues, such as the British Basketball League, are not considered good enough to even get into the Euroleague qualifying round, so they are left out of the Euroleague altogether. 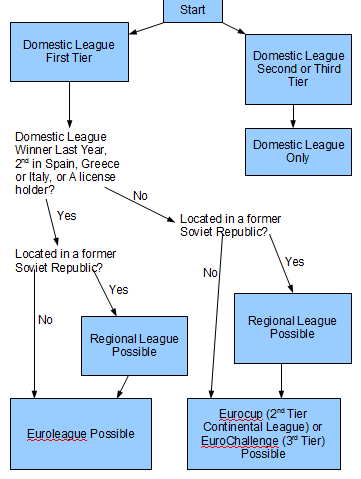 There's lots of technicalities involved, but if you want to understand European basketball on its' most basic level, look at the flowchart above. Anytime you hit a blue box (besides start), you've hit a certain league that your hypothetical team might be playing in.

CSKA Moscow is the current team of former Thunder center Nenad Krstic. This season, they will be playing in Russia's domestic league, the Russian Professional Basketball League.  Because they were the champions of Russia's League last year, they have qualified for their regional tournament. As they are from a former Soviet republic (Russia), they will participate in the VTB United League, the tournament for former Soviet teams. They have also qualified for the Euroleague by virtue of having a Class A license, but even if they didn't have the Class A license, they would qualify by having won their domestic league last year.

In other words, CSKA Moscow will be playing in Russia's domestic league to qualify for the VTB United League and the Euroleague next year, but they will also be playing in both of those leagues this year, as they qualified for them last year.

So, what does this mean for players going international?

Right now, two former Thunder players have signed in Europe. As stated earlier, Nenad Krstic has signed with CSKA Moscow. Furthermore, Mustafa Shakur has signed with Pau Orthez of France, which will be playing in the EuroChallenge, the third and last tier of continental European basketball.

Besiktas, the Turkish team that has signed Deron Williams and pursued Kobe Bryant and Kevin Durant, is not in the Euroleague this year. In fact, they are only in the qualifying round for the Eurocup, which is the second tier of Continental competition. Most players going there are looking at big money, rather than competition.

I hope this article is informative and helpful for you as we trudge through this locked-out season. More Euroleague and Eurobasket coverage is to come!