While some of the stars of the NBA have been gaining notoriety by playing in the Philippines (the Thunder's Kevin Durant and James Harden, in particular), another member of the Thunder who has traveled overseas to help promote the game and encourage young basketball players is Nate Robinson. We were contacted by Azrul Ananda, who is the Commissioner of both Indonesia's Development Basketball League (DBL) for kids and the National Basketball League (NBL) for pros. He made us aware of Robinson's presence in Indonesia this week and has and will be providing us with some first person accounts as to Robinson's adventures overseas.

"Personally, I think Nate is the perfect star to visit this camp. His size is close to average Indonesian, and he can motivate Indonesian kids more to try to achieve their highest goals!" - NBL Commissioner Azrul Ananda

Robinson is also not the first to engage in the Indonesian basketball camps. Several years back, the Pacers' Danny Granger made a similar trip and had a similar impact.

After the jump, enjoy some pictures and first person account from Mr. Ananda.

Robinson shows off his dunking championship skills. I love the expression of the fans there. 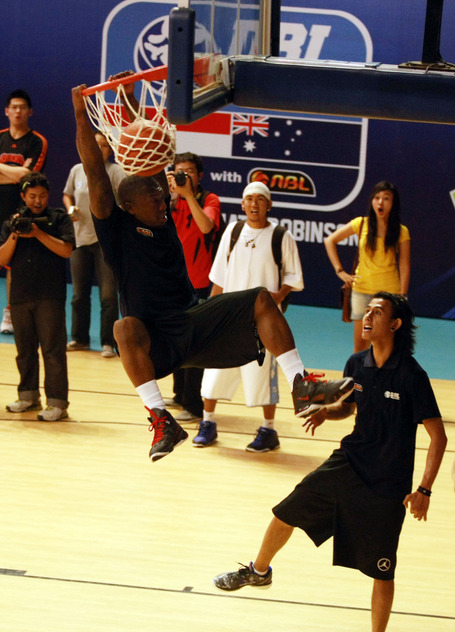 One thing that always moves across nationalities and languages is a big Star Wars pre-game show. 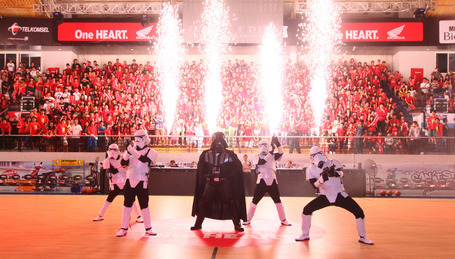 "Saturday night (23 July), Robinson attended the DBL (Development Basketball League) Finals (East Java state championship) in DBL Arena Surabaya. The DBL is Indonesia's biggest student basketball competition, held in 20 provinces (states) throughout the archipelago. The East Java championship is the last to be held in 2011 season. During the finals, Nate did the tipoff, judged a professional dunk contest in between the girls and boys finals, and lastly gave award presentations." 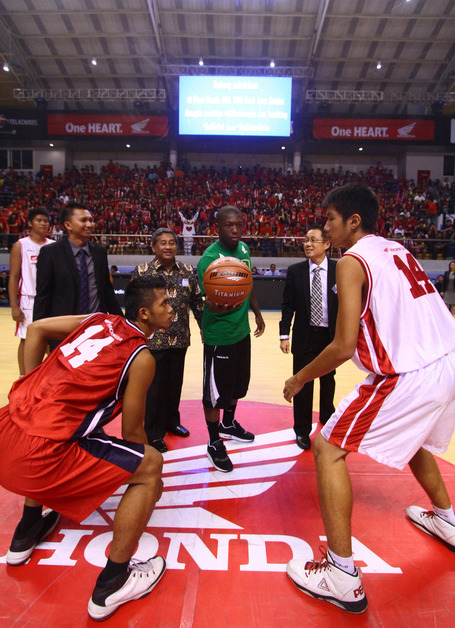 "On Sunday (24 July), Nate Robinson visited a Muslim Orphanage in Surabaya. [He spent time] playing with the kids and encouraging them to keep going and chase a better future. Later on, he participated in the DBL Camp 2011, where he joined NBL Australia and NBL Indonesia coaches to train some 220 best student athletes from the DBL competition (50-50 boys and girls)." 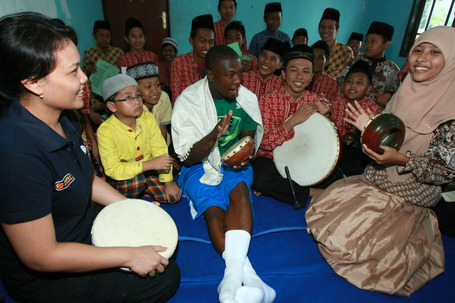 "The kids are selected from a pool of 27,000 DBL participants in 2011 season, coming from all over Indonesia. many came from really poor families, have never been on planes or nice hotels before they joined the DBL Camp! At the end of the camp, DBL will select the top 12 boys and 12 girls to join the DBL Indonesia All-Star Team. They will go to Seattle, USA, in November 2011 to play against high school players in Seattle. Amazingly, Nate Robinson is from Seattle. And he sponsored the Rainier Select Bulldogs AAU team coached by Jerry Petty, the same team that last year's DBL All-Star played against in Seattle!"

Nate Robinson's career in the NBA has not been without its bumps in the road, but one thing that all who have watched him can attest to is that Nate has an infectious and enthusiastic attitude for the game and the people around him, be they players or fans.

"I was not the tallest, the fastest, or the smartest kid. But I worked harder," Nate said to the kids during the opening of the camp.

Thanks to Mr. Ananda, and we hope he will have more in store for us in the future about Nate's travels in Indonesia.
*All photographs are the property of DBL INDONESIA and may not be republished without permission.