OKC Loud Links: What Will This Week Hold?

Share All sharing options for: OKC Loud Links: What Will This Week Hold?

All is quiet on the labor front, Yao Ming has retired, and players are jumping to Europe to play basketball. I can only imagine what surprises we're in for this week.

If I Ruled the (NBA) World | Grantland

Bill Simmons takes an in-depth look at all that ails the NBA and offers his usual wide array of suggestions. Even if you don't agree with his proposals, I think he does hit on something crucial - the NBA is struggling with its own identity and has rigidly stayed away from radical changes that could help itself out in the long run.

Yao Did Much In Little Time | NewsOK

In retrospect, Yao was the perfect man to introduce the NBA  to China and China to the NBA. Although I'm sure he often felt the weight of a nation on his shoulders, he never seemed to display the pressures of it, nor of being a franchise cornerstone.

This story, taken from 2005, is one of my favorites, because you can practically see the interactions going on. Yao invited veteran centers Dikembe Mutombo and Patrick Ewing to his parents' restaurant, and we got a little window inside the heads of three giant men.

Blott nails it - perhaps Joe Johnson might want to consider downgrading his wheels while trying to explain to kids why he makes more money than Kobe Bryant.

Berri, one of the brains behind Wages of Wins, pens a great column here about how the capitalism embedded in the NBA is all mucked up because the owners (the capitalists) do not actually provide most of the capital. He also poses this excellent question - how serious would the players have to be with the idea of starting their own league before the owners capitulate? It doesn't take as much as you'd think.

Union VP Opens Up About the Negotiations | Sports Illustrated

Amick gets a good interview with Union VP Maurice Evans, where he talks about the negotiation process so far. This statement should be cause for alarm, because it directly contradicts what the NBA is saying about its transparency:

Luol Deng was in South Sudan over the weekend when the country gained its independence on July 9th. He had joined in the work of former Syracuse player Kueth Duany in working to bring the game to the infant nation.

The WoW guys take a look at team defense and team help. OKC falls in the bottom third of their rankings, which is both frustrating and encouraging. It is encouraging in the sense that as good as the Thunder are now, there still remains a high ceiling for them to ascend to.

Deron Williams, who could be heading to Turkey if the lockout does not get resolved, says that many more players have inquired about playing overseas as well.

What Teams Risk in a Lockoug: Southwest Division | CBS Sports

Young diagrams out what is at stake specifically with regards to the NBA's Southwest Division. Specifically, the two long-time elites of the division, the Spurs and Mavericks, are getting older and a prolonged lockout would make future success even more difficult.

Lithuania Out of Bounds Play to End Half | NBA Playbook

Pruiti diagrams out a perfect end of half set that Lithuania pulled off in the Under-19 Championships. What I like about this set is that it is clear nobody on the court is all that athletic or even quick, and yet they make it work by using proper screens and spacing.

Kevin Durant, Derrick Rose, and other All-Stars have been invited to go to the Philippines to take on their team Smart Gilas Pilipinas if the lockout continues.

At least they weren't bracelets.

Shaquille O'Neal, recently retired, avoided the unemployment line by jumping to TNT where he will likely be joining Charles Barkley, Kenny Smith, and Ernie Johnson in some capacity. I just hope he doesn't become Magic 2.0. 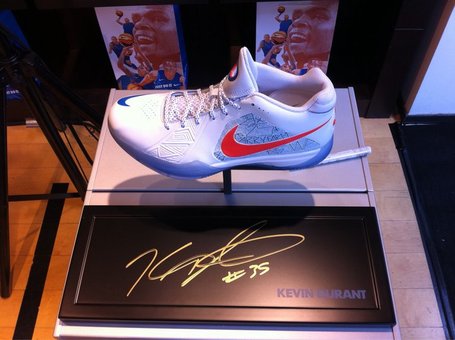