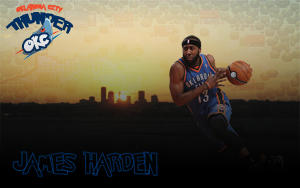 Recently I asked Adam Lucas, who had recently showcased his work on WTLC, to do some wallpapers for the site. He agreed, and today he unleashed upon us a James "Metapod" Harden wallpaper. For those of you who are too old to remember Pokemon or don't know, Metapod was a cocoon Pokemon. Essentially, it was halfway between a caterpillar (Caterpie) and a butterfly (Butterfree). Thus, it didn't have any attacks except Harden, because it couldn't move. This wouldn't be remarkable in and of itself, but early in the television series, the protagonist (Ash) had a battle with another Pokemon trainer, and both of them sent out Metapod. The only moves the Metapods knew how to do was Harden, which resulted in a long and hilarious battle with both trainers shouting at their Metapod to Harden more than the other one. And thus, you get the concept behind this wallpaper. Since "Harden" was Metapod's signature move, it's only appropriate to use it as a nickname for James Harden.

Have any design ideas? Be sure to let us know by commenting on the FanPost I wrote regarding the matter.